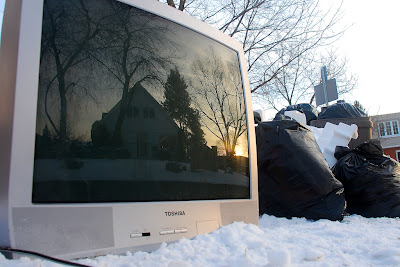 About this photo: We're winding down Thematic's "past its prime" week, and it's not too late for you to share your own. Click here to get in on the action. New theme, watery, launches tonight at 7:00 p.m. Eastern.

Welcome to my dirty little secret: Up until about two months ago, I had a CRT-based television in my house. I know how disappointed you must be. You probably figured a geek-journo like me would have been the first on my block to have a flat screen. No, TWO flat screens. Wait, COUNTLESS flat screens, each strategically wall-mounted throughout the house in such a way that I'd never have to strain my neck to catch the latest bit of Big Bang Theory banter.

Well, truth be told, I like it old school. And despite my love of being ON television, I don't much WATCH it when I'm home. So we soldiered on with our beloved (okay, not so beloved) 32-inch tube-fed Toshiba long after our friends stopped snickering at us. Or maybe they were snickering at us, except while they weren't in our company. Whatever.

Perhaps the poor set heard the snickering, as it began its slow decline last year with a line of distortion that began to appear toward the top of the screen. No biggie, as it made newscasters look like they had Gumby-like haircuts. I figured it made the bad news seem funny, so we kept it.

Well, the line kept getting worse, descending down the screen to the point that watching hockey games - with their computer-generated graphics across the top - became annoying. You couldn't tell the score, the time, or anything else remotely salient to the game. I'd use Twitter to keep the fam live-updated during games, but I could tell they weren't amused. It was time.

So we've joined the new millenium, with a television that uses a lot less energy (yay for green!) and displays a full picture from one edge to the other. No more Twitter during hockey - unless I want to. And even the kids have stopped snickering.

I didn't want to miss the transition, though, as even an old, busted TV deserves to be remembered in some way. Curbside seemed poignantly appropriate, though even now I'm not entirely sure why.

What a beautiful "past its prime" amazing shot of something so common today. This lost sad little tossed away TV set really appears to be brand new to me. Your capture of the area (inside it) is so fitting for this poor doomed set and "its last picture" show....what a great ending to your past its prime theme Carmi.

lol! I think I have that same TV!! Except mine is 20 something inches. The kids keep asking when we are going to upgrade . . . not yet :)

That is an amazing shot.

I'm smiling because this looks just like the TV my SIL sold at the yard sale on Saturday. The kids were sad and thought it was such a good TV, but it was very much time to go. (It was my mother's TV, and where she is, she has no need of television.)