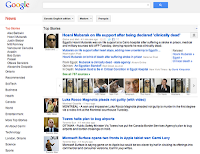 Big news in the world of tech: Microsoft is introducing its own tablet. The Microsoft Surface. Actually, two tablets, one targeted at businesses and the other at consumers.

I have, um, issues with this dual-solution approach, and I wrote about it in an article for the Toronto Star:

(Neat sidebar: The article has been trending as a top story in Google News for much of the day. What fun!)

I did a bunch of interviews in support of this story, and others, including:


Oh, and they're opening an Apple Store this Saturday just a few minutes away from my house, at the Masonville Place mall. I spoke with Hank Daniszewski of the London Free Press for his article, Apple debuts in London.