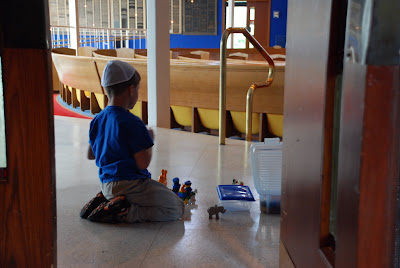 Playing on the edge
London, ON, October 2007

Major events in a family's life tend to affect each member in different ways. It's easy to forget that simple fact. It's easy to forget that, as you run around getting everything ready for the biggest moment of your eldest son's life, his little brother and sister are being buffeted by the same stresses that keep you up at night, staring at the ceiling.

At 7, Noah seems to have already figured out how to handle whatever's going on around him. In this image, he plays quietly at the edge of the synagogue's sanctuary while his brother practices on the bima - the raised platform in the middle (see here for earlier entry). I wish I had his ability to focus, to block out confusion, to hold onto the little things that matter in a little boy's life no matter what the context may be.

As I quietly reached through the doorway with my lens and took a no-flash, slow-speed memory of that small moment in a small boy's life, I reminded myself to pay closer attention to the tertiary effects of life on each member of my family. I wondered what he was thinking as his attention meandered between his own temporary playground and the sounds of his older brother preparing for something big and unknown. I wondered what he was remembering, what color it would be in his mind, what it would feel like to him years later when he would be the one in his brother's place.

I wanted to ask him. But it didn't seem right to intrude in this moment. So I put the camera away when I was done and went back to the chaise lounge in the lobby. I don't think he ever suspected I was there, which is as it should be.

Your turn: Childhood memories from the periphery. Please discuss.

lovely image Carmi...thanks for sharing so much of your family life on this blog...
many times I am made aware of the tertiary effects of life on the other members of family (not always my own) as I see things played out in various situations...
Childhood memories from the periphery... brings up many emotions and feelings, actually quite a tough place to be...
Have a lovely weekend, Katie

The Harbour of Ourselves said...

he looks rather lonely in the photograph, although it sounds as if he isnt.

i do not envy you trying to keep three seperate lives from being wounded by one anothers triumphs. So fdar i havent had the trouble. with 12 years between my two sons they are nearly only children.

I remember my older brother having a difficult at home. He and my mom were fighting a lot and she spent a lot of time tracking him down all the time. This happened to us during a week when I was supposed to make a cake with my parent for a cub scouting event. In the end my sister helped me and I went to the event by myself.

Looking at the photo make me think of why I try to make sure my number 2 gets the same attention as my number 1. It is hard at time of change or stress, but is needed even more then.

Hello from Michele, and thanks for making me ponder life and not let the day just slide away.

Beautiful picture, and nice perspective.
As for on the periphery, my older brother and sister were very close in age, and they grew up best friends. I spent a lot of time by myself or with my mom since I was about 6 years younger and not welcome in their close knit-ness. For the first 7 years of my life we lived in very rural areas with limited playmates. I think this is partially why I find such joy in reading, a whole new world full of action and adventure. They are also my refuge when things aren't going so great in reality. Later in life, when puberty hit I got heavy, which put me even more on the periphery. I have a hard time being involved with a group, and I am always worried about making a bad impression, or worse an enemy, so I'll stay quiet and reserved.
Okay, way to long of a post for a Meet-N-Greet!
Have a great day.

Queen of Light and Joy said...

I come from a LARGE family (9 of us) and I remember as a small child being left out quite a bit because I was the "odd one out" and not minding. I focused on my imagination and lived quite a bit in my mind. It's funny, because my brothers and sisters can't get enough of me now and want to hear and be close to anything that resembles me. I feel like a rock star.
Here from Michele's <3

I remember as a child day-dreaming and having to hold something in my hand - like a stick or a pencil. I would shake it in my hand as I day dreamed. I don't know why, but I remember doing that.

The picture of your son reminds me of my 7-year old daughter. I've seen her many times playing with her toys in her own little world.

I was an oldest child, so most of my memories of watching my siblings involved things I'd done before... not quite the same as this. For me, I totally idolized my Aunt Rita. She had all these high heeled shoes, and I remember watching her get ready to go on a date, slipping on one shoe that I really liked, even though my foot didn't feel up half of it, and wishing I could go on a date too.

Thanks for sharing this beautiful moment with us.

beautiful picture Carmi. The silent focus and comfort captured jumps out of this picture so much I feel like I'm there right beside you observing.

Peripheral childhoods. A friend and I were discussing this very topic last night after dinner. She has two boys, with very different interests and personalities. She was telling me how difficult she finds it to be equally attentive and responsive to their interests etc and yet how important it is to try to maintain that balance somehow.

Kids, like adults need to learn that sometimes another take precendence..........it's just part of being a family who supports one another.

What a wonderful story and picture. By capturing this moment and putting it to words, you show Noah that he is valued and always the center of his parents attention.