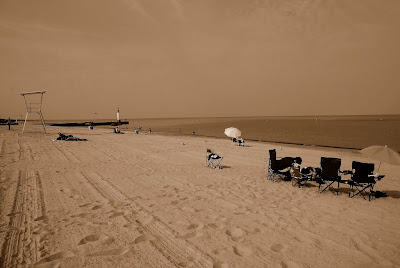 A day at the beach
Grand Bend, ON, September 2009 [Click all images to enlarge]

My wife and I believe in simple traditions, one of which revolves around going to the beach on the last day of summer vacation. It's a tangible way for us to transition from the relatively unstructured to the completely structured. More importantly, it's something we think - hope? - our munchkins will carry with them until long after they're munchkins. Simple moments, after all, seem to stick with us far longer than any others.

So we loaded the wo

ndervan with our most treasured things - the kids - and headed north to the shores of Lake Huron. The weather wasn't promising, with low clouds dimming the Tim Horton's parking lot - another tradition - as we topped the little people off with breakfast. Predictions of rain only added to the "Why are we doing this?" mantra that hung over the day. But still, we went. Because traditions are traditions.

The beach, as predicted, was virtually empty. As we unloaded the boogie boards, towels and chairs van in the near-empty parking lot, my wife and I fretted quietly about the weather. The kids? Didn't care at all. They shrieked happily that they had the whole beach to themselves.

In the end, it didn't rain. But weather-fearing wannabe-beachgoers stayed away in droves, anyway. As ever, the kids frolicked in the chilly water. As ever, I took pictures o

f them. As ever, I took pictures of random birds and waves, as well. It was a typical Levy day at the beach, and as we carted our tired crew home through the achingly beautiful agricultural hinterlands of southestern Ontario, we knew we had succeeded in creating another memory for them.

As I look back at this day, Monday, September 7, 2009, Labour Day, I can't help but think of it as a so-called "before day". A day when we knew no better, when we had no idea that our world would soon change, when we simply enjoyed without worry. A few days later, my parents came to visit, and reviewing pictures of this day, and of the similarly sweet and simple time they spent with us at home, I wish I could go back to the moment these were all taken and freeze time.

It would be nice to freeze time... before that sweet baby turned 23 and was on her own, before we lost loved ones, before change. I have to stop and remember that some day...... all of MY "afters" will become HER "befores" and she will need sweet, sweet memories to keep her going too.

As nice as it would be to remain in the "before days", we humans are a bit like certain species of fish. If we don't keep moving forward, we drown.

And so we move ahead, like it or not, and create new memories in the "after days". Realizing that the journey requires every step we have to take, not just the ones we want to take.

And truly? If you could freeze time, would you really want to? Because that would mean missing out on your son's first college hockey game, and your daughter's wedding day, and marveling at the wonder of your grandchildren. You'd never celebrate your 50th anniversary with your wonderful wife because it would never arrive.

There is still much left ahead Carmi. Much that is good, some that isn't. But it's all necessary.

my gram always said that life was like a great tasting stew. you have to put some of the bitter herbs in to really bring out all the flavor.

my gram was brilliant...

your family is in my prayers.

But if the power to freeze time existed, someone would have stopped it long before you and yours came into the world. Look at all the joys you would have missed.

There will be new wonderful memories and joys to come. Once you get past the ashes, there will again be beauty. God promises it.

And isn't it all those "before" days, with their multitudes of memories, that make the "after" days tolerable?

so we move ahead, like it or not, and create new memories in the "after days". Realizing that the journey requires every step we have to take, not just the ones we want to take.
Work From Home

like a vapor. life.
Everything you say brings back moments of before, and after.

On September 6 we did the same thing. The weather was not the best but it was the day we had. the water was too rough with dangerous rip currents but It was the last day we would be able to spend with our oldest here at home for what will be a very long time as he is now deployed again to Iraq for the next 12 months. We did go to see him a couple weeks ago to help him pack up his stuff and his car to bring all of his things on the 1000 mile trip home for storage while he is away, but it is not the same as seeing him here on our home turf. We move forward through the days until we will see him again perhaps this spring on leave. I would have liked to freeze time back when Rob was home with us but I don't want to freeze time now, next October and his homecoming cannot come soon enough for me.