Why do we have 10 fingers? Redundancy. 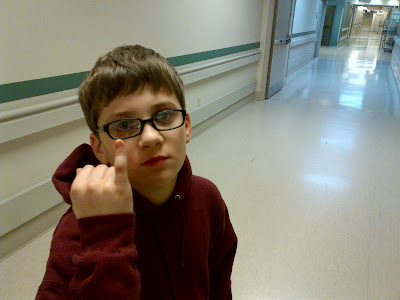 So little man had a bit of a bad day. After his pinkie found itself on the wrong end of a playmate's knee, a scintillating evening at the ER confirmed what he'd been telling us all evening: it's broken.

Noah's reaction as soon as the doc delivered the verdict? He high-fived me. With his other hand, mind you. But he was so jazzed that he now had something in common with his older brother and sister that he was willing to overlook the immediate pain in favor of a little longer-term notoriety. He buzzed about how he was going to tell his friends, and bantered with the doctor about how it would all play out on Facebook.

In the overall scheme of things, this isn't earth-shattering. As jarring as an unplanned visit to the hospital can be, this one paled in comparison to the experiences of so many others. It wasn't remotely life-altering, and after a followup visit with the plastic surgeon later this week, it'll slowly evolve into a shrinking memory in his life's rearview. But still, the dad in me wishes I could have done more to prevent it in the first place. We want to protect our kids from everything and anything, yet this time as always, I realized yet again how futile that ideal can be.

Manyana. He survived. And with a great story to share with his friends when he heads back to school next week. And as he takes centre stage in the middle of his gaggle of buddies, I'm left with a delightfully rich set of mental images from this night: of a sweet boy in his pyjamas who calmly and politely answered every question thrown at him, and who managed to charm everyone he met along the way; of a kid who, despite a clearly painful injury, told me as I tucked him into bed that he was glad he got to have this adventure with his dad; of a kid who somehow manages to turn an apparent negative into an obvious positive.

Because that's the kind of kid he is, a perfectly empathetic, good-hearted mirror of my wife, a soul who never fails to make everyone around him feel a little bit better, whose sweetness defines him and makes me wish I could be more like him. And I got to experience this speed bump with him. Lucky me.

Carmi I'm sorry but I'm going to assume Noah is your son with the wounded pinky finger? My wish for Noah is that he grow up just like his dad, sees the beauty and joy in life and looks back in his older years and gets a really good belly laugh out of this.

You told the tale so well, I admire your writing technique and style, you have a gift my friend, a true gift!

So glad he is flashing the pinkie! lol.. My wish for Noah is: Keep your parents on their toes!. Keep surprising them with your smarts and humor...

My wish to Noah: That he keeps his ability to turn these little bumps in the road into something positive. Broken finger = adventure with dad and a new connection with the siblings. Beautiful attitude!

What a cute story. Your son obviously has your ability to see the positive in every situation. I love the look he's giving you in the photo too. Adorable.