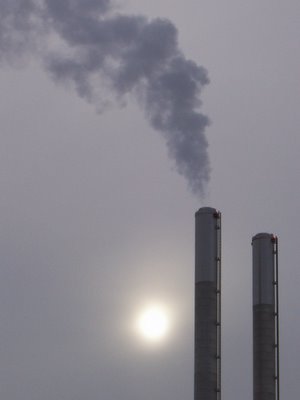 First thing every Friday morning, I allow nurses to stick a largeish needle into my arm so they can suck some plasma out of me and use it for folks who need it more than I do.

As I am very much a creature of habit, I look forward to Fridays. I find the people who work there to be extremely kind and giving. I find the other donors to be inspirational. It's an ideal way to start the last working day of the week. I'd like to think that hanging around there for a couple of hours every week makes me a slightly happier person. And if it doesn't, then at least I'm trying.

This week, as I headed into the parking lot waiting for my ride back to the office - alas, no biking until the snow melts - I couldn't ignore the melancholy sky. Although the sun was out, it was a sun unlike any other. It was a mere smudge. It had no energy, no verve. It reminded me more of a Monday morning than anything else.

The sun's position relative to me put it immediately beside a couple of smokestacks that looked like they had been plucked from some post-industrial nightmare. I liked the composition, so I reached into my bag and grabbed the camera.

It isn't that it's a world-beating action shot. But every picture says something to the person who views it - and often different things to different viewers. Whatever this one is saying, it whispers it in muted tones.

thanks for the kind words

Carmi, sometimes I think just "knowing" you helps me feel like a better person.:)

It tells me that regardless of what we do to damage our universe, the sun will overpower it...

It's the visual image for Ani DiFranco's song, Trickle Down.

Well, the image is hooked to what you wrote, so I think of why someone would need donated plasma. Environmental toxins come to mind. They might have anyway.

makes me think of this line from a song...dont know the title..."black hole sun, wont you come..." ha, might even be the wrong words, but it can't be held against me since i'm at work in protest and on every cold medicine imaginable...

Help!The sun is covered by the smog. It says to me; help.

Good for you for giving blood so often! I wish I could, but an not able to. I have been on the receiving end though, so let me say "THANK YOU" heh heh..

This is a great shot. For some reason I see it as dreary and sad... Almost cold, emotionless and intimidating. However, that might just be me imposing my own mood on it.

The cover of my highschool copy of Dickens' Hard Times came immediately to mind. Likely because I am currently enjoying the BBC production of Bleak House!

An image of optimism ultimately - that despite the 'crap' that life throws at you, the sunshine will get through...

Or maybe that is just wishful thinking?

I love your pictures...

Good on you for doing such a great, selfless thing! I often wish I had the guts to donate plasma. I pass out giving regular blood, but I'm O-, so I feel like I have to do it. And w/out fail I end up w/ my feet up in the air wondering what happened after everything got dark.
Michele sent me today.

It is whispering to me 'stop killing the planet'

Love this photo...Well, I love ALL your photo's Carmi...It is very evocative...it is mysterious too...like otherworldly...
How wonderful that you give plasma every week...do you ever think about all the people you have helped and what their stories are? It wouldbe so interesting to know or at lesst imagine...I've always felt that this kind of exchange makes you have a special connection to all these people and they to you, too.

It tells me there are some people working. So many smoke stacks like that look like two towers in the sky...because the plants have moved to places with cheaper labor.

It is the dying gasp of industrialism. I hope.

love the pix... here from michele's.

the pix has character... but I'm not sure what it is saying to me... I can't hear it as my children are running around like hooligan's right now... maybe i will come back later and listen!