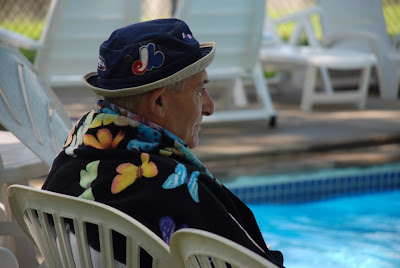 Please caption this image
[Click here for instructions on how Caption This works]
Laval, QC, August 2008

If it's easier to be healthy than it is to be sick, then it's also easier to have healthy parents instead of sick ones. But no one's life follows a set plan and the path we ultimately take isn't necessarily the one that's most fair.

As many of you may know, my father's path hasn't been an easy one in recent years. Even when he's home from the hospital - as he was during our trip to Montreal in August - he continues to have days, even moments, when the mishmash of overlapping illnesses that have come to define his life choose to make themselves even more obvious.

I was haunted as soon as I took this picture. I almost felt that, as his son, I shouldn't be taking photos that might upset him or my mother. I had been walking along the perimeter of the pool area, shooting inward as he sat quietly beside the water. It wasn't a good day for him. Yet I still shot. And despite an initial urge to delete the file off of the camera, I kept it. And still it bothered me.

Three months later, I've chosen to share it here. On the small chance that he ever sees this, I hope he understands that I capture the things I do not because the world needs to be depicted in airbrushed perfection - i.e. everyone from every generation lined up in neat rows smiling perfect if insincere smiles - but because sometimes things should simply be depicted as they are.

About this photo: I include this image as part of this week's Thematic Photographic autumn theme (available here) because his look suggests reflection. I wonder if, as he stares out at his grandchildren playing in the pool, he's wondering about the seasons, and how they don't just apply to the months of the year, but to our entire lives as well. We don't discuss these things in our family, so I use my camera and my pen to do the discussing for me.

Your turn: Please share a caption for this photo. Unlike past Caption This images, this one isn't funny or flip. Still, I hope you'll give it some thought and share your thoughts in a comment below. For more background on Caption This, please click here.

About last week's image of Frasier tucking Dahlia in: It's moments like this that reinforce why a chaotic house filled with kids and noise is the perfect place for me. Honorable menschens go to the following wondrous folks:
David takes it with "Must LOVE dog." He creates wonders with his hands, and is an inspiring person on a number of levels. Please drop by his blog for a congratulatory word or two.
Posted by carmilevy at 11/09/2008 04:22:00 PM

I smiled when I saw this photo of your Dad....not knowing initially that he was having a bad day, I took in a calm reflection emanating from him while he sat cloaked in butterfly fleece.....and of course noticed the wonderful hat he's wearing. Like me, he's

"Wrapped in a butterfly towel, lost in his thoughts"

Thank-you for sharing this photograph with us. And for being real with us. Not easy.

"Reflecting the Deep End."
or
"Butterfly Moments."
or
"Draped in Butterflies."

I couldn't not join in this week when I saw your father's photo in my reader; I suspected it was him. Knowing his has been a difficult road over the past few years, I had to click through and read your thoughts. You will never regret taking that series of photos, I imagine you intuitively know this. It wasn't an invasion of privacy, it was capturing him (and the others) in a moment of "ordinary life", which somehow, in it's own way is spectacular.

I wish I had more photos of my dad in his last year--THAT void I DO regret.

I've missed your Caption This for too many weeks...so here are a few that popped into my mind to get things started. This picture will stay with me this week...perhaps I'l be back with more :).

The Old Man and The See

Seen and not heard

This is a great candid photo. contemplative. It's as if the butterflies are a metaphore for his thoughts.

I hope the good days outnumber the bad.

It wasn't a good day for him yet there he is poolside watching what probably matters most to him in this world. Pictures like this bring a lump to my throat and it's because they seem to capture something that can't be put into words. How can you capture a thought in a photo? Yet this photo seems to capture it perfectly. So beautiful.

Thank you for allowing us to enter a wee bit of your father's life with this incredible photo. Here is my offering before reading your explanation of the photo:

"Being still, loving you forever."

Looking Through the Waves

I spy something blue


*carmi, poignant picture. thanks for sharing!

I think you will be glad you took this. Now that my grandmother is gone there are so many pictures that I wished I could go back and capture.

I took many photos like this one - unposed, daily life, and unbeknownst to him - of my father in the months before he passed. I too felt a bit guilty at the time but now I take great comfort in them. They remind me that life isn't all skies but that my da was always there when I needed him. I hope you too can find comfort in your photos one day too.

ANother one came to mind:

I don't have a caption but I think it is a lovely photo and one you will cherish for years to come.

before i even read your post, i looked at the photo, and my first thought was "someone's zaide". although you hate to see your father sitting so quietly, quietly enduring his discomfort, this is still a beautiful photo of him. take care.

This is a touching photo and post. I don't have my dad in my life anymore. He died suddenly before my youngest was even born. I miss him terribly and I would relish a photo like this.

Back in the day
when rusty staub used to play
and where sometimes there were midseason snows
gone now but I remember the expos.

I have not visited your site before and just linked over on the autumn link but this wonderful photo caught my attention. I don't know if anyone was in the pool and he was watching them but it seemed to me like he was at peace, but still yearning for the days when he would join in.

A wonderful portrait of your Dad. I'm glad you took it even though it wasn't on the best of days for him. He's watching his family enjoy life and I think that's what deeply matters to him.
"In retrospect"
"The Circle of Life"
"Metamorphosis"

i hope your father was 'at ease in uneasy times'.

Thanks for sharing this photo, Carmi. It reminds me very much of the way my Dad looked a few years ago... It was a timely reminder. He looks introspective, but happy, to me.

Hope all is well.

I am not good at this caption thing but I will give it a try:
"memoriessssss, light the corner's of my mind"??????

I have to I got so sad while reading this about your papa. I am so sorry for him for you and for your mama! You all will be in my prayers!

He looks beautiful to me, Carmi.

I'm glad you took the shot.
I suspect it will bring you much peace at some point.

Oh, Carmi...I took photos of my sweet grandfather on his deathbed. My hand on his...my hand on his cheek.
Sometimes the camera can be a security blanket.

If looks could feel...

Reflections in the shade

This is a fantastic photo Carmi. Having just lost my mum this photograph is very powerful and makes me wish I had taken more recent photographs of her.
Take care and stay strong my friend.