For those who served
London, ON, November 2008 [Click all images to enlarge]

When the kids have playdates on weekends, I often stay out to avoid the need to make two round trips. I guess it's my small effort to drive less. Lame as this eco-thinking may be, it also gives me an opportunity to cart along the camera and spend a couple of hours shooting pictures of parts of town I'd probably never see. So after I dropped the young lady off, I played with the GPS before finding a nearby cemetery.

I'm not overtly morbid, but the day was as miserable an autumn Sunday as you can imagine: steely gray sky with the occasional wave of angry black clouds, off-and-on spitting rain, and a cold 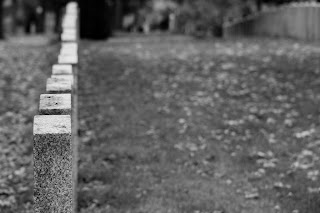 wind that cut through my many layers of Canadian-sensible clothes. But I was feeling a touch melancholy, so I thought a quiet walk in a graveyard would give me a chance to think. And if it resulted in some worthwhile photos, so much the better.

As I walked through the front gates, I felt self conscious, even though no one was around and my camera was still unobtrusively tucked in its bag. But as I got deeper in, I got a little bolder. Before long, I took the camera out, checked the settings and started capturing the scene around me.

I brought a bunch of images home that reflected this week's autumn theme (see Thematic Photographic for more) as well as the upcoming Remembrance Day ceremonies. Tomorrow marks 90 years since the cease fire that ended the Great War's (later World War I) hostilities. I also ended up with a tickle in my throat for my troubles. I guess there's a price to pay for surreptitiously taking pictures in a cemetery.

I still think it was worth it.

Its an image of crosses at the Bay of Quinte Cemetery near Belleville.

No, I have never taken photos in places like this...

I looked at the date of the armistice on a poster, but I didn't do the math. I love to walk through cemeteries, especially those that have gravestones. When my children were young, we went walking through a small one not far from my house.

I remember remarking about the number of deaths, especially of children, during the great flu epidemic. (I'm assuming that's why there were so many.)

I have some photos that I took last year when I was at my son's up in Virginia.

I did take photos in a cemetery, of my daughter's gravesite. It felt a little strange, but I knew I had to do it, since we were planning to move soon.

Photos are so healing.

I just have to say...and I've wanted to say this before...your kids are so lucky to have a dad like you.

As a genealogist I think it is entirely normal to take photos in graveyards. I have quite a bunch of them. I took dozens of photos of gravestones in Scotland, when I got home and examined the inscriptions more closely I realised I had discovered my hitherto unknown to me great-great-great-great-grandfather.

I love shot number two. I love seeing what you saw and how you captured it.

We are studying that period of history this year...not the easiest thing to explain to kids.

Hard not to be struck by the poignancy with these type of pictures.

Like you, I've found times when I've been somewhere waiting and looked around a churchyard.

There's so many stories there if you pay attention to the inscriptions. I'm sure the people there would be pleased to know they were being thought of for a few minutes, admittedly by a stranger.

Yes, just this past week I've photographed at the cemetary twice. It's very close to our house. I find it to be a peaceful place where I can slow my mind down. I love the way your photographs seem to find the emotion of an inanimate object, like they are living things.

I think photos in a graveyard are fine - they are peaceful and beautiful even in moments of extreme sadness.

I really love this post and the last one. Just wanted you to know.

Yes, I am forever haunting cemeteries. I love the history and the feel.(now that didn't sound quite right) but I do love to visit.
Perfect post for Remembrance Day or Veterans Day as we call it here.
Check out Hilary's post at Smitten Image. She has a wonderful video about 2 minutes of time.

Great photos. I don't think it is morbid at all. I love to visit cemeteries for their serenity and tranquility. It is amazing to catch a glimpse into their lives by the many thoughtful markers on their resting places. I think autumn is a great time for reflection and your photos capture that spirit.

I find cemeteries fascinating. There's one in Niagara On The Lake that's packed with history.

Photowannabe, how sweet of you to mention my Remembrance Day post. Thank you kindly. :)

cemeteries fascinate moi (weird, I know) but ever since I saw Blair Witch project, I am a little cautious when I approach them , particularly on a dark, gloomy grey day.........love the second shot, Carmi.

I LOVE to take photographs in cemeteries. I spent one whole day in Paris in one. Every North and South Carolina coastal town I've ever visited has at least one graveyard which has been the victim of my camera.

I send a lot of frame cards with my photos in them. Although I love my grave photos and most of them are really beautiful, I am very superstitious about sending one so most often opt not to.