We have missiles, too 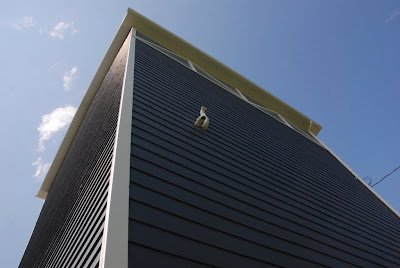 Whenever student housing takes over a London neighborhood, things seem to go downhill for homeowners whose only mistake was choosing the wrong place to live. Since we're very much a university town, stories of strife surrounding student housing are regular features in our local media.

Sometimes, developers get involved, and while most of them take great pains to do the right thing, some of them seem to be associated with blowups more often than others. Exhibit A is this bizarrely narrow and tall rental property, one of three on a corner lot in the middle of a neighborhood of low-rise, single-family homes. These properties sprouted up following a years-long battle between the developer, city zoning officials and local homeowners upset that the character of their formerly family-oriented neighborhood was being paved over with high density student rentals - ratty couches, empty beer bottles and late-night parties included.

After the developer ultimately won his case, he built these rental properties - with windows turned away from the street, and landscaping that makes 70s-era Soviet bunkers look lush by comparison - that not surprisingly didn't secure him invitations to the annual homeowners' BBQ. They're derisively called MX missiles, and every time I drive by them, I smile ruefully at the nasty spat that drove their creation. On this lovely June day, I decided to get up close and personal, and this is the result.

In the end, I suppose it's a matter of perspective. The homeowners wanted the integrity of an already besieged neighborhood to be preserved. The developer wanted to ensure his livelihood. The city wanted to keep everyone happy. In the end, no one was.

Your turn: Why must the winner sometimes be crowned at the expense of the loser? (And if you'd like to share a perspective-themed photo for Thematic Photographic, follow your mouse here. New theme's on the way, too.)
Posted by carmilevy at 9/08/2009 05:24:00 PM

In the London developer/homebuilder industry, these are known as " the towers of spite". And appropriately so.

P.S. Thanks for the win Carmi, It was shiploads of fun.

The ancient struggle unfolding a college towns througout the world!

2) I was hoping we could use your ‘scribing’ talent for our website.

The Best Shows Youre Not Watching (dot) com [all one word]

The new adventures of old Christine is one of our featured shows. We’re hoping to round up a few people who can occasionally contribute perspective (via an article/blog) on the shows – maybe a recent episode, future direction, plot shortcomings etc.

What’s in it for you?
Primarily a larger audience back channeled to your blog. We don’t pay but the site has a lot of promise and we're pretty excited about getting it off the ground. Let me know what you think.

What I can't understand is what is that thing on the side of the building? A pigeon?

Valid point about the developer.