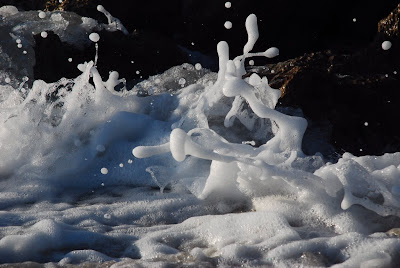 I'll be brief because I'm up at an ungodly hour and my head's spinning too quickly to go back to sleep. But I came across this in my archives and thought I'd share it with you.

I can't seem to stop thinking about the unfolding disaster in the Gulf of Mexico, and how it could render tiny, blink-and-you-miss-it moments like this crashing wave mere memories for a while. Mankind has a nasty habit of messing up chunks of the planet - just ask the human and non-human residents of Prince William Sound, who've been trying and failing to fully get rid of traces of the Exxon Valdez spill for nearly a generation - and this latest oil spill is yet another chapter in an ever lengthening book.

The fallout from the explosion and sinking of the Deepwater Horizon rig serves as yet another reminder that something's got to change. I asked this simple question on my Facebook page the other day - Watching the Louisiana coast get smothered by a slick. Wondering how much longer humanity can continue the petrol parade - and ended up touching off a debate between friends living on opposite sides of the planet.

It was a great, eye-opening discussion, and I've been thinking a lot about that exchange ever since. I realize I have no answers, though. So as I look at scenes like the one at the top of this entry, I think to myself that it's time I came up with a few.

Your turn: So, what can we learn from the environmental disaster in the Gulf of Mexico? Will we ever learn?

First - what a great picture!

The Gulf tragedy is - just that - an unbelievable tragedy. It seems we never do learn from our past mistakes. I love Mr. Obama, but he is making a dreadful mistake if he still feels we should allow offshore drilling. A mistake that could destroy us.

I think we always learn from our mistakes, but mistakes will happen again. The airline industry comes to mind...whereas they've made great strides in safety over the years, a headline-making mishap lurks somewhere in the shadows. Lake Erie has not caught fire again recently, rather it is a fisherman's paradise once again.
Mankind (like an infant) is still learning to walk without stumbling and falling so often. We make messes, (great BIG ones sometimes) but we clean them up.
All the while, I don't think the planet cares a whit about what we do.

Ben makes a compelling point, and one I've been pondering a lot in recent days. The planet will outlive all of us. Our extinction as a species is inevitable. The only real question is whether we will bring it about ourselves or if the natural laws of the universe will do the job for us.

The balance between survival and extinction is as fine as a spider's thread when measured on a universal scale. The sun is 93,000,000 miles away, but the difference between its distance from the South Pole and Equatorial Africa is a mere 12,000-13,000 miles. That's only 1/100 of 1% of the total distance, barely noticeable.

Just a degree or two of axial inclination, or a few centuries or maybe millennia worth of orbital decay and life as we know it isn't even a historical footnote, because there will be no one left to write it.

The point of all this doomsday philosophy? As a species, we don't have a hell of a lot of time left to us. Maybe we could make better use of it, yeah?

(Oops. didn't mean to hijack your post. And I almost forgot to say I love this photo.)

I dont have an answer to the question but that is a brilliant image.