Scene from a hospital 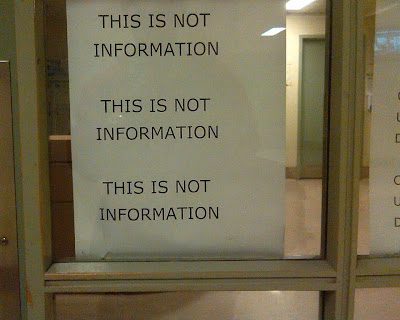 The scene: We were on our way out of the hospital after visiting Debbie's mom. It had been two days since my father's funeral - seven months later, it still hurts to write those words - and between his loss and her mom's illness, we were feeling a little more shellshocked than usual.

There's a long hallway on the ground floor that leads from the dingy-looking elevators to the exit. It's the same concrete block-walled, pipe-lined-ceiling hallway I traversed as a kid when I ended my own tours of duty here, so I always walk it just a little more slowly, to drink in the echoes a place that's imprinted itself in so many ways on me and my family.

We're here so often that I try to notice what's changed from one visit to the next. On this particular walk-through, I notice one of the laser printers in an adjacent clinic has been working overtime. The windows are now festooned with bureaucratically-structured messages, all seemingly designed to remind patients when they should show up, what they should bring, and what they can and cannot do while they're waiting.

And this sign, which stopped all of us dead in our tracks and made us wonder just what they were thinking. Sometimes, laptops and laser printers really should be taken away from those who haven't a clue.

Absolutely stunning! I'm trying to imagine the kind of mind that taped that thing to the window, and I can't do it.

Good grief! A grouchy supervisor or a disgruntled worker who will soon be out of a job?

Carmi... Well seen. I imagine it is the tired response from an overworked member of staff in an open plan office who is fed up with being asked for information...

It sound like the sort of thing you would have had in a Monty Python sketch from the 70s.

Perhaps there was one pane left uncovered and this was all they could think of to "keep it uniform". Or, is someone hiding something with the papers? Hmmm.... better get a solid door. Or, if the patients read this and do a double take, they might go back and read the REAL information more closely.

I'd say the sign is a lie. It is information. It's informing us that it's not information, which is -- by definition... information.

Usually what he meant was either "I don't know" or "It would take way longer to explain than I have time for right this minute." But from a philosophical point of view, he was quite correct. Obviously. Because there I was asking questions.