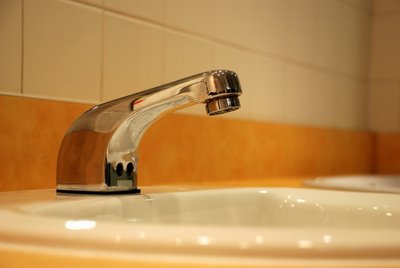 A little over a year ago, our brood stumbled upon a lovely little oasis on the long road to Montreal. I took a picture of the faucet in the family washroom because I thought it was rather neat that this lovely and well-maintained facility existed in a mall. Let's be honest: mall washrooms are usually much cruddier than this.

So as we cruised through Belleville early in the morning en route to Montreal once again last month, we found ourselves staring at the same faucet we had first seen a year earlier. Thankfully, the facility was still just as clean as it had been then. I did what anyone else would do: I looked around to ensure no other folks were there (imagine explaining to strangers what you're doing taking pictures in a bathroom...that's as quick a trip to the local jail as any I can imagine) and took a quick picture from the same vantage point.

Email ThisBlogThis!Share to TwitterShare to FacebookShare to Pinterest
Labels: Macrophoto, My travels

Definitely. Some subjects never lose their appeal and I find myself constantly wanting to retell that story again and again through pictures. And sometimes the subject has changed and that in and of itself can be fascinating.

I do it out in the yard; seeing my roses and daffodils, etc. year after year is a real treat. I like to track the growing progress.

Often I revisit n re-shoot the same landscapes, but the day-time, light, angles are always a bit different.

Intermediary rest stops are essential, as you'd guess when I do pics there, they are of the trees... (haven't posted those)!

I have alwyas enjoyed watching the changes (or lack thereof) our house has gone through as we take pictures of our children growing up.

Invariably I find myself checking out the backgrounds that the subjects are standing in.

On a side note, I enjoy doing the same thing with pictures that online friends post on my motorcycle web site. It is interesting to see what their garages, driveways or houses look like behind their motorcycles...you can tell a lot about a person by the unrelated background paraphanalia.

Yes. I always think there might be a better angle or lighting and the final picture might be better.

About 22 years ago now, I went camping in a very remote area in Colorado. There was a beautiful little stream that flowed down a hillside, across rocks with fallen trees and leaves and smooth rocks. I snapped a 35mm picture. The next year we returned and I found my way back to that spot. To my eye it looked as if everything were in the same position... so I snapped another picture for comparison. Perhaps leaves had blown away; perhaps there were a few more limbs, but the rocks and the fallen tree trunks were untouched. This was truly an area barely visited by human beings. I was amazed.