A stranger's sojourn by the sea 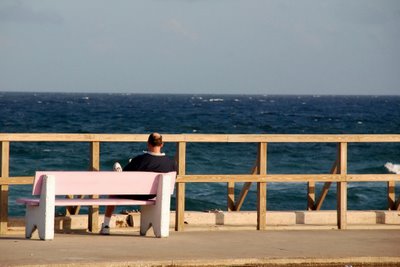 Staring out...
Lake Worth, Florida, December 2006
[Click to embiggen...enjoy the pattern in the fence]

Photographing total strangers is a bit of a dicey proposition. I take great pains when I'm out in public to avoid shooting people's faces. You simply never know when you'll run up against someone who simply doesn't want his/her face on film (OK, not film...) Of course, it cuts both ways: I'd rather keep my face off the cameras of others as well. And don't even ask what I'd do if a total stranger took surreptitious pictures of my wife and kids.

(Time for a tangent: I made a slight exception for the recently-posted ladies at the nearby pool. They'd been watching our kids raise hell in the water all week. Somehow, it felt less taboo to shoot pseudo-anonymous pictures of them. Let the debates begin. End tangent. For now.)

But the back of someone's head from a distance is a bit of a different proposition. Unless said subject has a Gorbachev-like splotch on his balding head, it's difficult to identify anyone from behind. And a longish lens comes in very handy when you simply want to capture the image and move on.

Which is what I did as I walked along the beach that afternoon. I have no idea who this person is. He's a stranger who took a moment to contemplate the meaning of life alongside an immensely large body of water. Indeed, the not knowing of this image is what made me want to shoot it in the first place.

Your turn: Let's project our imagination on this person, shall we? Who is he? Why is he here? What is he thinking? Where did he go after his sojourn by the sea?

One more thing: This image was taken along the same stretch of beach in Lake Worth as the pink-and-yellow image I posted last week. I guess the pink is a theme.
Posted by carmilevy at 1/15/2007 12:24:00 AM

Clearly the bench warmer is composing a romantic ode to the one woman who makes his heart surge like the tide itself.

Or, you know, wishing he had a fishing pole.

Hope you're well. Haven't been writing much, but blogged tonight, at least.

OK, I think this must be my last Michele-induced visit for the evening. You know, I want to think sweet, romantic thoughts. But his foot is up, and he's leaning back as though he's tired and a bit detached. If the surf was inspiring him, he would be leaning forward with his elbows on his knees, I think.

I dunno... maybe he just wants an ice cream cone.

I was going to say that the pastel pink on the bench added that perfect little touch of an unexpected color.

Oh, man. It's way too late for such contemplation.

It's difficult for me to come up with a back story when there's little to no detail to work with, however, as far as the "contemplation of life" premise goes - I can work with that -

He looks exectly like a friend of ours from PA!

I think he's contemplating senior year in high school, and what might have happened if he had dated the mousy English major instead of the glamorous cheerleader, from whom he is now divorced.

Oh, and of course, Michele sent me this time!

This confused and baffled man is reading a letter sent to him from a mistress two years in the future. Granted, he's seen The Lakehouse, and at the time, he dismissed it as sheer fantasy; however, he cannot deny the fact that here he sits, gentle spray of the ocean rolling over him, with a letter dated 2009.

He can't go home and share this with his wife. What is she going to think? That he's lost his mind? Most definitely lost his mind. Lost more than his fair share of it when he decided to retrieve their 401(k) to open up a comic book store in the mall...against his wife's wishes.

But this was different. If she thought he had lost it at that time, it was a sealed deal that she would leave him over this.

"They're not pointless. Just misguided," he whispered to himself, still holding the letter in his hand as his eyes beheld the depth of the sea.

Well, here I am again, courtesy of the fabulous Michele!

I changed my mind. He is thinking about how to attain world peace and wishing that he were president so he could end the war.

Hi Karmi! I din't leave a messge at Michelle's because then I would have been above and below you. Still not quite got the plot.
Re snappihg - when I was in India in the most colourful market I snapped and snapped but to each person I said 'namaste' with hands together and head bowed and they seemed quite happy.
The man is looking at the ocean and thinking ' where's this wine dark sea everybody rabbits on about. This is BLUE!

Carmi, maybe you better hope you company is not monitoring computer usage.....LOL

Michele sent me to tell you to be careful!

I bet that beach scene looks extra good today! michele sent me by this time.

it's his first day on vacation and he hasn't quite got the hang of feeling totally relaxed, nor has he replaced the white sport sox and shoes with a pair of pink flip flops...........or er........sandals. :)

He looks like he's still connected to work and home and all such worry inducing things........just the posture I'm going from.

Just one question... i saw your comment over at Michele's: "still writing"... did you sleep at all tonight?!?!

The color of flamingos.
I too don't like catching other folks faces in my photos. I did get some walking feet down at Kemah this past summer. I secretly held sat the camera on the ground in front of me and would click it from time to time. Got some interesting shots.
I took a photo of a bench in front of a New to Me store. I liked the shadows it made on the stuco wall behind it.

Since the arrival of the Internet and posting of photos, I tend to be much more careful. Guess it has to do with an invasion of privacy.
But this man....he's retired, lives alone, walks to that spot almost every day to contemplate his past, present and future.

LOL...after commenting on all your recent posts, I should have just gone to Michele's first...because she sent me back here.

That could turn into to quite complex debate....

Although I like the picture it give of an aura of peacefulness and serenity ;)

He has just arrived there on vacation with his wife. Its their 12th wedding anniversary. As his wife shops in the store behind him reading the tourist information book from the hotel.

ps I liked the idea and may post about it later... credit given of course! Thanks for the inspiration!