When we bought our house, it came with a bunch of features that most homeowners in the 21st century tend to value: functional indoor plumbling, electrical service, a roof with no holes, and a basement that didn't flood every time it rained. But what really sold us on the place was the giant rock under the lovely dark red maple tree on our front lawn.

It has also served as a launching pad for our kids as they learn to jump from heights that are gradually turning our hair grey. Yet somehow, they survive, they thrive, and they'll likely never forget this leftover hunk of primordial matter. I don't know what we'll do when we move someday. But wherever we end up, we'll need to have something like it, otherwise it just won't ever feel like home.

I took this closeup of its evolving network of cracks. Over time, it will be reduced to mere earth, much like rock has been de-evolving for eons before we came along. But for the snapshot in time during which it sits quietly in front of our kitchen window, it serves as the basis for timeless memories for three adventurous kids. 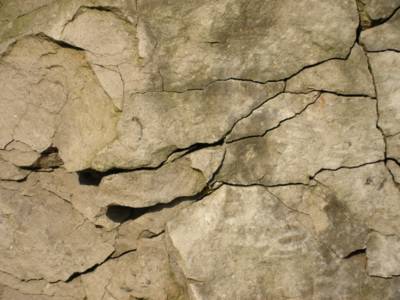