A long time ago, we bought our first house in a suburb of Montreal known as Dollard-des-Ormeaux. A couple of weeks before Zach was born (he's 10 now), I took my camera to a nearby park to waste a couple of rolls of film. I wanted to get some artsy pictures because I figured I wouldn't have enough time to do so after the baby was born. I was rather correct in that regard - but happily so, for having less time to shoot forces me to think about subjects and ideas a lot more.

The park was (and likely still is) known as Centennial Park. It was carved out of a pretty huge piece of land in the middle of the burb, and had an artificial lake as well as walking paths through the forest. The earth that was excavated to make the lake was piled up immediately adjacent to it, and became the town's tallest hill. I didn't bring my ruler that day, but I reckon I was at least a few storeys above the surrounding two-storey abodes.

It was early October. I stayed for a while, shooting right up until sunset. The last picture I took was the one I'll remember most. As I tripped the shutter on the tripod-mounted camera, all I could think was that our house was somewhere below my field of view. Somewhere, sight unseen, my wife waited at home for me to finish playing with my camera so we could get on with the rather more serious business of welcoming our little munchkin into the world.

Two adventures intersected at that moment: The sun was setting on my little photographic adventure, and was about to rise on a far more meaninfgul one. 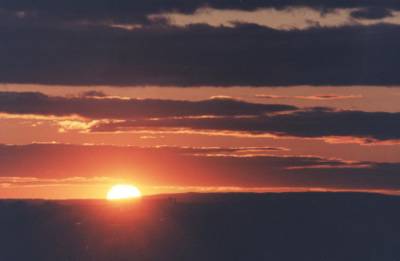 Hello, Michele sent me. Excellent post! You have a way with words and an eye for the great shot!

Did I understand your story to say that your wife was going into labor as the sun was going down?

Whoa. I have no words to describe this.

Joan: don't worry, I didn't cut it that close. She gave birth a couple of weeks later. She was simply spending a quiet Sunday afternoon at home.

David: Welcome to the blog. I hope everyone who reads this will follow your link back to yours as well. Great reading!

Diva: Thanks! I felt the same way as I sat on the top of the artificial mountain. Sometimes, nature makes us feel very small and humble. And that's a good thing.