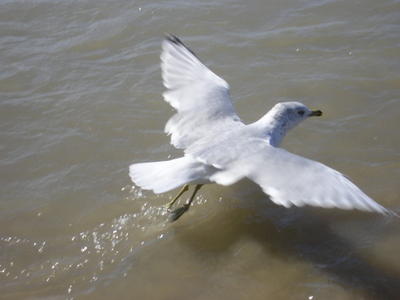 Before I was old enough to coherently remember, my parents would take the family to a beach about an hour-and-a-half out of town. It was on a lake that was connected to the St. Lawrence River system, and although my memories of these experiences are quite fuzzy (I think I was around 2 or 3), I still have somewhat vague images of playing in the sand and chasing birds floating around my mind. Either way, the thoughts still make me smile.

Fast forward to today and my wife and I are sifting through the images and stories from our most recent trip to Grand Bend beach. It's around 45 minutes from our house, on the shores of Lake Huron, and the kids have come to love the wide openness of this place. Little man, Noah, still insists on calling it "The Ocean" because, just like the real ocean near his grandparents' winter place in Florida, the waves are big and he can't see anything else out there. I can't really argue with his logic, so "The Ocean" it remains.

As at most beaches, the seagulls are pretty aggressive. They walk right up to you and grab whatever unattended food they can find. They're scavenging, sometimes-mean-spirited birds who wouldn't be missed by most beachgoers if they simply disappeared.

Consider me the exception. I love watching them fly. Their grace in the air belies their sad reputation among us humans, which makes me wonder why more folks don't take a second or two to watch them glide in for a landing. It's rather inspiring. And considering the fact that we can't fly without $150 million tubes of technology, their accomplishment is all the more impressive.

So as I watched them do their thing in the stiff wind that marked this day, I thought I should capture them in pictures. Easier said than done, because they move fast, and they're not the most obedient animals in the kingdom. So I reverted to my childhood strategy: run after them and see what happens.

This, apparently, is what happened. I couldn't plan this picture. I kept my finger down on the shutter, and crossed the fingers of my other hand.

This bird doesn't have a name. I probably scared it half to death. But this image of this graceful animal's first nanosecond of flight will stick in my mind through the cold winter ahead as our kids look forward to their next visit to "The Ocean."

Your turn: With your permission, of course, I'd like to continue the theme from yesterday's photo:

Liftoff! White and graceful are the 3 words that come to mind, Carmi. I left my thought of what to shoot at yesterday's post.

And Michele sent me back!

i grew up at the SC coast. such sights as this Gull taking flight are like the scent of fresh bake cornbread; senses adrift in the sea of memories.

Michele sent me your way, Carmi.

It's really difficult to get a good picture quickly of birds taking off or landing. That was a good job, Carmi. I love to watch gulls fly also--and seeing them grab food flung into the air is also neat. But it is true that they can really be a nuisance.

Those are the three words that come to mind. Great pic!!

No ideas today. :( Except, I don't know, the color yellow.

my three words: I fear water :)

thanks for stopping by my blog and leaving a comment. I really appreciate it!

I actually spoke out loud - "Oh wow". Flight has always fascinated me [might be since I've never even been in a plain]. Graceful, serene, wooosh.

I left my thoughts here yesterday too, such as they are. I forgot to mention 'mountains' though.

You capture so much beauty. I love seeing the way you see the world. You make it a beautiful place.

I can't say I agree with you on the seagull flying bit, especially since they crap practically everywhere. But then again, we can't do our bit without a $100 piece of porcelain. Maybe seagulls are impressive after all.


I love the nature pictures.

youth, storm and ark
(because it a young seagull, muddy churned waters and resembles Noah's dove)

In answer to your 2nd question, Carmi, anything that you can capture that is fleeting and beautiful to you.

No ideas for you, sorry. I'm decidedly "blah" today. Here via Michele today.

I have a seagull (Or as I like to call them, goonybird story)

When I was in Atlantic City with my sister this July we had a funnel cake that we were sharing for breakfast, until I saw a sad hungry pigeon.

They weren't mean spirited, but they sure were hungry and they ate more of the funnel cake than we did.

You do such a wonderful job at the photography all on your own, I'd hate to lead you astray with a cheesy suggestion! Just keep up with what you do and I'm sure we'll all continue to love it.

Carmi, you write the nicest comments of anyone! Thanks for reading mine and sharing your life with us.

Michele sent me today!!
Yet another beautiful picture. I think you should keep on shooting whatever it is that you want because you do such a great job of it!!!

nice photo! I still duck whenever I see a seagull coming, though :)

Hey, you have a great blog here! I'm definitely going to bookmark you! I have a autumn beauty site/blog. It pretty much covers autumn beauty related stuff.