The world wakes up 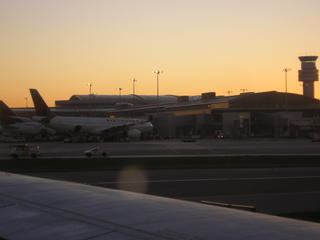 Airports are always rather interesting places, but never more so than early in the morning. There's someting hypnotic about this huge, alien world populated by loud, alien craft that captivates the imagination as light begins to bathe everything in sight.

The rest of the world may be sleeping, but thousands of people are rapidly coming together in the bluish shadows to get these winged monsters off the ground and on their way.

Early morning light is addictive in and of itself, but it becomes more so when it reflects off of the shapes and forms of an airport. Shadows mix with soft light to paint pictures that just don't happen any other time of day.

Before you know it, your plane leaves all of this behind. But for some reason the images of mornings like this seem to linger in my mind. I suspect I'm not alone in this.

BTW, happy new month, everyone. Don't despair that it's September already, as we still have three more weeks of summer in the northern hemisphere. (I know, there's always a bright side.)
Posted by carmilevy at 9/01/2005 11:22:00 PM

I am flying to Austin early in the morning next week. I will have a new perspective thanks to all of your pics and reflections :)

Despair? No way. What's not to like about fall? Leaves changing, hockey starting (FINALLY), the NFL too, baseball playoffs, a new TV season and rambling comments from (some of) your blog visitors. It just doesn't get any better than that.

Despair! Not a chance! My daughter is going back to school next Wednesday! :)

Carmi, if you want to go somewhere beachy, do not go to the hotel in my post! Their beach is the pits.

Did you read the post below the pic about zip lines in CR?

And on an even brighter side... after a very cold winter, summer is finally coming back to the southern hemisphere!!
From what i here you guys get very beautiful Autumns anyway, so why despair?

Michele sent me today... but I would have stopped by anyway.

That's a beautiful shot. And it wouldn't be the weekend if I weren't here to say Hi, via Michele's Meet and Greet!

Hope you have a wonderful weekend.

Flying is not my favorite thing. September means starting fresh since I teach. :)

I love the airport...I like to people watch and try to figure out the stories behind people's relationships...

Here from Michele's for tonight's visit

Despair? You're kidding! Can't wait for fall! Love your pic - I've always loved that time of day (when I'm awake to see it, which ain't often these days). Enjoy your weekend!

found you via Michelle - great post and a beautiful photo. i will back! nice to meet you. :)

Ok, so I admit it....I commenting on this pic last weekend....so I cheated! I went and peeked at a few other pics. I have to say, I really, really like Goggle Girl...altho Frog Google Boy and Google Boy were close seconds!

ROFL...one should never try to get past word verification when one has had several glasses of wine....going to try it again!

Hi. Here from Michele's & coming back soon! I like your blog.

Despair, no. Hope, yes! Summer's on its way in the southern hemisphere!

THanks for swinging by my blog, come back again in a few weeks to see if I follow throught with the stripes!! LOL

Read your entry about airports, and you are soooo right, there is nothing liek an airport.

And, lastly, thanks for not trying to sell me anything!

Hey Carmi. I've seen your posts on a few blogs around but this is the first time I've been on your site.

I hear you about the airports but early in the morning my eyes are way too sleepy to observe well. I don't truly wake up until 11am or so. Unless, like today, my girlfriend forces me to go to bed before 1am in which case I'm up at 5am with nothing to do! LOL

Been doing more than my share of flying lately--I just love to people watch!

Ugh, don't remind me that there are 3 weeks left in the summer. I'm ready for fall NOW.

Here from Michele's - a bit late. I was supposed to come earlier and got sidetracked.;)