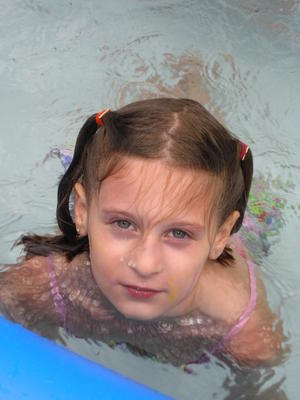 I remember the first time I saw her. It was an ethereal image on an ultrasound screen. As usual, I couldn't make anything out. The technician printed the image for us, and it looked like a peanut. I scanned the file - peanut.tif - to my computer and e-mailed it to everyone we knew. Before we even knew she was a girl, she was our peanut.

When she finally made her way into the world, I looked through tear-covered eyes at a tiny little version of my wife. When I wiped my eyes and held her, I remember thinking how small she was. I wondered what happened to the rest of her. At 5 pounds, 15 ounces, she was even tinier than her older brother had been. Miniature as she was, she squirmed when we held her and instantly became the addictive little person that she remains today.

We lived in a city far from home. We had moved there, in the dead of a bitterly cold Canadian winter, mere weeks before my wife became pregnant. Dahlia's arrival was likely the first piece of good news we had had in that strange city since, well, the day we found out we were expecting. Over time, we would come to call this place home. But at the time, it seemed so far away.

It took Dahlia a while to grow any hair. At first, we thought she'd be bald for a very long time. Thankfully, she started to grow something on her head by around her first birthday. As soon as she could, my wife, Debbie, put a sprout-like bow on top of her head to stop the "is it a boy or a girl?" stupidity at the grocery store.

She's been putting "pretties" (what we call barrettes and pins and other similar fixins) in her lovely blonde hair ever since, and I had trouble coping the first time we took her for a trim: I was worried she'd come back like a sheep.

Today, she bounces around the planet, turning cartwheels and backflips wherever she has enough room. Her pony tails bounce wildly as her little form blurs across the room, the lawn, the school playground, wherever. She's a bundle of energy who loves school, loves her friends, loves pretty much everyone around her. She's a little mother to her little brother, and never ceases to be the peacemaker whenever someone has a problem. Although I can’t believe it’s been eight years since Baby Dahlia came into our lives, as I watch her go through the paces of being her I often can’t believe that she’s still a little girl, so old is her soul.

Mazel Tov! What a beautiful child. She looks A LOT like her Aba.

your children are so incredibly blessed to have you in their lives; loving them, caring for them and obviously providing inspiration around them.

What an adorable peanut! I hope she has the happiest of birthdays with many more to come :)

Happy Birthday Dahlia!! What a cutie!

What a wonderful post....and a beautiful little girl!

She is beautiful...and my gosh, those eyes are unbelievable.

And so funny about the birthdays!