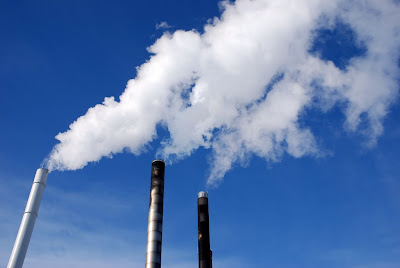 Please caption this image
[Click here for more info on how Caption This works]
London, ON, February 2009

Clouds don't always have to occur naturally. The launch image of this week's Thematic Photographic theme, in fact, includes a couple of contrails that over time could have easily blanketed the sky. So when I began thinking about a cloud-themed photo for Caption This, I knew I wanted to include something caused by those big, bad polluting humans.

I thought immediately of the series I shot on a bitterly cold day just a few months back. The goal that day was to shoot a slightly irreverent headshot for a magazine article on cloud computing. Since my extensive entourage was otherwise occupied, I shot the sequence alone in a near-deserted parking lot on the university campus near my house, using the GorillaPod to set up low-angled perspectives from the snow-covered parking lot.

By the time I was finished with the head shots, my fingers were numb and my nose had started to turn white. But that didn't stop me from shooting the chimneys before I retreated to the warmth of the car and headed home.

Your turn: Please come up with a creative caption for this photo and share it in a comment below. Enter as often as you wish - we'll be taking captions all week before announcing the victor next Sunday. For more background on how Caption This works, click here.

About last week's recycling box photo: I admit I enjoy the whole recycling thing. It forces me to tangibly review everything we're throwing out. It also forces me to think twice about the things we purchase or otherwise consume. Much better than the old toss-and-forget philosophy that dominated earlier generations. The following folks deserve honorable menschens for the following gems:
Anne's suggestion "What will I be next time?" was particularly resonant. I often wonder the same thing as I stare at the overflowing bin by the curb. The more transparent this process becomes, the more likely we are to incorporate sustainable principles into our everyday lives. In this regard, I hope our kids ask questions like this more routinely than we or our parents ever did. Her blog, Anne's House, is an ever eye-opening window into the world of someone with seemingly limitless energy and creativity.
Posted by carmilevy at 6/28/2009 05:10:00 PM

My Little Pony farts too.

P.S.S.S.S.S.
Follow your nose, it always knows the flavour of barbequed unicorn wherever it goes...

And The King Of Pop thought he was "BAD"

Huffin' and a Puffin'

I considered the man-made variety when I was trying to come up with something for v.1.0 and wanted ot tie it to the "Glass" theme from a year ago, but then I found the trifecta photo and the idea slipped out the back door like a thief in the night.

I'd love to see the head shots you came up with -- they must've been interesting to say the least!

I've been neglecting even my OWN blog today in the pursuit of other Things of Importance, but I did manage to continue the theme for yet another installment.

hi.. just dropping by here... have a nice day! http://kantahanan.blogspot.com/

I found them reminding me greatly of thin cigarettes, so here's my entry...

I'm back for more... But I still don't have a witty caption.

"The deck is stacked against us."

Three Stacks to the Wind!

* Let's see if we can make rings. Together now!

"When will we learn?"