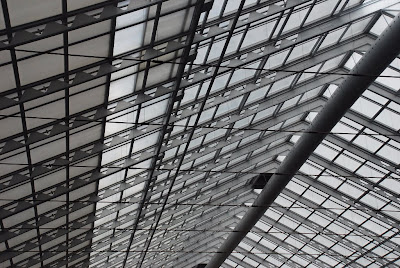 There's a hotel in our burg, called the Lamplighter, that's so brilliantly built that it's a wonder no one else nearby has copied the concept. They built a massive atrium between the wings that houses a pool, water slide and deck area. You can sit in your room and watch folks while the day away, or sit under a gazebo and drink yourself silly while a blizzard rages outside.

Although staying in a hotel 15 minutes from home isn't really in the cards for us - though, on second thought, maybe it should be as an occasional treat. Must mull this one more... - it's become a popular spot for kids' birthday parties. Which means we've spent lots of quality time under the glass roof over the past little bit. And anytime I'm just hanging out, I'm bound to start staring at things. And this thing certainly merits staring, so...

I thought a perspective on a place that's been so good to our kids would be a nice way to close out our lines theme - a cleaning of the palate, if you will, before we segue into the abandoned theme at 7:00 this evening.

Your turn: Your most memorable birthday party was...?

One more thing: I've done a bunch of interviews following the just-released report from the Organisation for Economic Co-operation and Development (OECD) that concluded Canada was the third most expensive country on the planet (well, of its 30 member nations, anyway) for cell phone service. In short, it would seem we're being hosed. So yesterday I spoke live with CTV News Channel's Brad Giffen, then walked across the street to the CBC and chatted with Ron Charles for a report that later aired on The National (Story here, Quicktime video here, Real Media video here.)
Posted by carmilevy at 8/12/2009 05:40:00 PM

I had a surprise party at age 10...it was a bowling party, and they'd told me it was moved to a week later because it conflicted with another friend's birthday. But that week, they had me dress up and get in the car so we could go practice for the real thing. I arrived with my mom and my sister - my dad and brother had gone ahead (can't remember the excuse, the car or something). When we got to the alley, my father took us to a party room that had a "reserved for lissa" sign on it. He said it was the room my party was in next week (just how gullible was I?). He then put his hand over my eyes and opened the door. When he took his hand away, everyone was there, screaming "surprise!" and I loved every moment.

Another memorable birthday was my 40th...though not a good memory. My mom had died just 2 weeks earlier and it was a birthday I didn't want to celebrate. We had a BBQ all together, with a beloved cousin who was in from out of town, but it is a sad memorable birthday.

I try to make each of my kids' birthdays the most memorable, from their waking up to balloons all over the house or coming down to a candle in their breakfast. I want them to celebrate and know they are celebrated, every day, not just their birthdays, but using the excuse as a birthday is a great occasion to get all mushy!

Well it would have to been my most recent one...the one where I "gasp" turned 50. And not because i'm losing my memory at this advanced age. My sister in law/dear long time friend sent a telegram singer to my work place. I've never been much for public displays. I've always warned and threatened my family that if they ever told the restaurant staff that it was my birthday that I would kill them...well not really but I would be big time mad. But this time it was so unexpected and so many people at work were so taken with it that I have to say I loved it.The words he sang were special and it meant a lot to me. It's nice when you can take a regular old work day and have something special happen.

Memorable birthday parties? Hell, I barely remember my birthday most years. If by "memorable" you mean a party I remember, yeah, there have been a few. If you mean ones I want to remember... that's a shorter list.

PS: Are we ever gonna find out what the Magical Mystery Lines were made by??

I had a sleep-over party when I was 12 or 13. We were up all night, a first for me. I slept the next day and woke up at 5:00. I was so disoriented, it was dark out, I didn't know if it was 5 in the morning or in the evening, and why were there lights on in the kitchen?

Carmi I looked at your piece and my feelings expressed some of what society today has made us into. Maybe it is not the same in Canada but my reaction was immediately 'Who else would be watching the children having rented a room for the purpose?' My wife works with children and the safeguards / fears that exist in this work area result in questioning not just who parks their car near a school or place where children are playing, but who buys the houses there.

We tend to cater for the extreme worst case scenario, rather than allow kids to enjoy the freedom and innocence that we had.