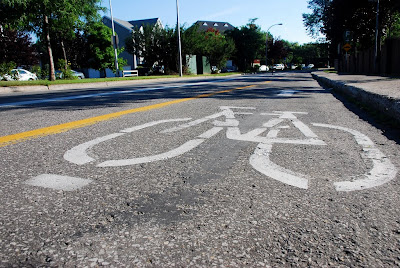 About this photo: Every week, Thematic Photographic, our recurring photo participation challenge/activity, gets a new theme. I thought I'd launch this week's theme, perspective, with a bit of a backstory. Here goes...

Perspective is a funny thing. Some of us choose to be somewhat empathetic in our dealings with others, doing our best to at least try to see things from an opposing position. Some of us, unfortunately, do not. We instead content ourselves by intensely focusing on our own two cents, convincing ourselves after relentless self-repetition that we're absolutely right, they're absolutely wrong, and it's ridiculous that they fail to appreciate the brilliance of our position.

The barbs have been flying fast and furious since Ontario's former Attorney General, Michael Bryant, got involved in a violent downtown Toronto exchange with Darcy Allan Sheppard, a 33-year-old bike courier. When it was all over, Mr. Sheppard was dead - apparently after being dragged beside Mr. Bryant's convertible - and Mr. Bryant was charged with criminal negligence causing death. As I alternately use motorized four-wheeled and pedal-powered two-wheeled vehicles to get around town, I find it interesting to see how polarizing the debate has become in the wake of this avoidable tragedy.*

In a nutshell, cyclists blame motorists, motorists blame cyclists and neither side seems willing to appreciate the perspective of the other. So the anarchy - along with the occasional senseless injury and death - continues. Here's where I sit:
They may not like each other all that much, but motorists and cyclists need to learn to get along. The alternative - namely more senseless deaths like Mr. Sheppard's - isn't acceptable. Neither is the status quo on our roads. By adopting a somewhat more evolved perspective toward the needs of others, we may yet manage to improve matters. Needless to say, I won't be holding my breath that either side will learn from this experience. So the stupidity continues.

Your turn: Thematic Photographic is fairly simple and fun, and I hope you'll take part. All you have to do it take a picture reflective of this week's theme, then share it. In this case, perspective can be optically tangible, or it can be a little more topically abstract. The fun lies in how you choose to interpret it. Once you've got your pic, post it to your blog, then come back here and leave the link in a comment. If you're new to TP, read on...
*We'll debate the specifics of the Bryant-Sheppard case another time. There's enough lionizing and demonizing of both parties happening in both conventional and social media circles now that I'd rather just stay out of it entirely. The courts will figure it out eventually, but in the interim we'll all still have to get along on the roads. Hence my attempt to share some perspective here.
Posted by carmilevy at 9/02/2009 07:00:00 PM

I love that point! "Cars always win at the physics game." That's why I can't be a cyclist, as much as I appreciate the ecological arguments in support of it. I lost much of my sense of balance about a decade ago to a (benign) brain tumor, so I do not ride. But I am hyper-vigilant when anybody smaller than me is around while I'm driving. I don't think I could live with the knowledge that I caused someone serious injury.

My "perspective" photo is up...
-smarmoofus

Wonderful analysis of the situation "Everyone's capable of being an idiot." I love it, and I couldn't agree more.

I also enjoy the different levels in which your photo ties in. I'm going to have to think a bit before posting this weeks TP. I see much potential with this one.

Everyone is indeed capable of being an idiot. And it may be your right-of-way, but if it isn't given to you, it isn't yours... esp. if it is a pedestrian or bicyclist vs. a motor vehicle. *sigh*

For the record, Idaho or Iowa has passed this nifty law -- since the law of the road was written for cars and not bikes -- where a stop sign is to be treated (by cyclists) as a yield and a red light as a stop sign. When there's no cars around, that's what I hold to around here -- it's too hilly to do otherwise.

And yes, I wear my Road ID. Just in case.

Easier said than done Carmi. Handing out big fat tickets to cyclists who blow off traffic laws is a a nice plan in theory. But while cars always win at the physics game, cycles always win at the agility game. Meaning "you have to catch them first" and as easily as they disappear by accident, disappearing with intent isn't a great leap. Further, since cycles aren't -- in most jurisdictions in the US at least -- licensed or registered and require no driver's license it's not as simple as pulling over a car and running a plate to find out who you're ticketing. Additionally, a significant percentage of cyclists are those either too young for a driver's license or who have had theirs revoked or suspended. so while ticketing scofflaw cyclists is a great idea, it's practically unenforceable.

And since we're on the topic, the argument that cyclists have just as much right to the road as motorists is at least slightly flawed -- at least in most jurisdictions in the States. Motorists pay registration fees and vehicle taxes, and in some cases road use taxes and even fuel taxes in order to help maintain the road system. And as we've just discussed, the same laws don't apply equally to both groups.

In short, we cannot achieve equality between the two, but it may be possible to achieve some sort of equity if both groups are reasonable enough. There aren't many of them, but there are a few bike lanes in my town. All posted as No Parking zones during certain hours (mainly hours when the schoolkids would be using them for their commutes). Given sufficient space and some white paint, more of these can be marked off, but even then cycles don't easily mesh into the traffic pattern. That is, a cycle legally in the bike lane gets creamed because he's in the blind spot of a car making a legal right hand turn across the bike lane. Who's at fault here? Better question, who's maimed or dead here?

But I've already considered your experiment when I contemplated converting to pedal power to get to work. And realized very quickly that my life expectancy would plummet if I made that move.

Unfortunately I don't have an answer that will satisfy both groups and be cost effective enough to actually implement. But I do have a photo. (You knew I would didn't you?) Though I went with something a bit more literal and a lot less dramatic.

Thematic Photographic 65: "Perspective" v.1.0 - Just Like They Taught Us In Drafting Class

Mine perpective is upp.

I am up here, hope you enjoy!

WOW what a theme and what a story, a very sad one too Carmi. It always angers me how pedestrians are treated by car users but then again pedestrians can be a pain in the butt too especially in Tenterden our nearest town we have two crossings and no one uses them!

Here is My Perspective

My favorite line was "Everyone's capable of being and idiot" So true. :) Mine's up HERE

I did a version 2 on a review of a festival I just got back from.

Here is My Perspective of Greenbelt Festival

Carmi, thank you for sharing this information. Food for thought.

I took the painter's route as used in still life photography. Here is mine:

Ohhhh and you didn't even add motorcycles into the bucket! You know... it really all boils down to PEOPLE just need to RESPECT other people. No matter what your driving, riding, or the color of skin, or what language you speak... just follow the Golden Rule! Do unto others as you would have done unto you. *nods*

Mine's UP! It's silly this week!

Urban design needs to re-think. Wonder if the architects of Citi Field envisioned young fans watching a different game than the one of the diamond.

Riding my bike as often as I do I watch traffic carefully and follow the same rules as I would with a car. But I don't see many of the car drivers doing the same. Love bike paths, safer for us all. My shot is up.

I can imagine you crawling there to get this super shot on perspective. Like it a lot!

Love your point Carmi and your shot!

My first version is up.
Have a great friday :)

What depth it is in the picture. Great view. I like that. I love wide angle.
Mine is up now

My 4 year old is learning to ride a bike now. Carmi whip "them" into shape so I don't have to worry about him will ya?

I didn't think I had anything to submit for these weeks' theme....but it occurred to me, today, that I did.

That's a tragic story. I doubt Mr. Sheppard thought it might be his last day on earth when he got on his bike that morning. Angry people in cars are dangerous. People on bikes - angry or not - are very fragile.

I live near Seattle, which for the most part is a very pedestrian and bicycle friendly city. This very topic is a frequent subject on NPR .... always trying to figure out how to make it a better co-existence.

The points you make are excellent.

Finally... here are my perspective images.

I have a really late entry this week, but I took some photos on Labor Day and had one that I really wanted to enter :)