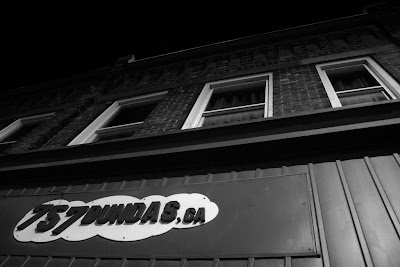 About this photo: Thematic is sharing letter-themed scenes all week long, and we'd love for you to share your own, too. Just go here to get the lettered party started.

You can't talk - or argue - about the fate of London's downtown core without including at least some mention of Dundas Street. This east-west artery is the backbone of the central retail district, and it runs from there clear through - and beyond - the east end of town.

Time has not been kind to this road, and a walk down its worn-down sidewalks can be more than a little depressing if you let it. But I've never much felt comfortable allowing a street to dictate my mood. And I'm a big fan of perspective.

I think that's because I grew up in a much bigger city, with a much bigger downtown, whose problems to this day seem to dwarf those of my adopted hometown. Indeed, when I went to school in Montreal, some of the crumbling streets there made London's Dundas Street on its worst day seem positively quaint in comparison.

Which is my way of saying even after a late-night stroll down a particularly sad stretch of Dundas, I remain convinced that this burg has nowhere to go but up. That it's only a matter of time before the planets align and folks with money and dreams return to this neighborhood and turn it back into the magnet it once was. I guess that makes me a dreamer. So be it.

For now, however, this now-abandoned URL stands as evidence of a future that once was.

Everything else around it must fade away. Sounds silly doesn't it? But after living as a child in Lansing, Mi. and having lived in St. Louis, Mo. and now living in Minneapolis it seems people are either suburban or downtown people period. Having worked downtown in St. Louis and Minneapolis that's how it works. Try to get some of the suburb folks to come meet you Dt, well it's almost unheard of. We have the Mall,and a million chain restaurants in the suburbs. I once went to Hartford, Conn. and I swear many of the corners looked just like home. Same major book store, Barnes and Noble, same places to eat same stores. And I wanted something new? People here might venture from the suburbs for something like a play or museum, but you never hear the end of it...hence our Downtowns become ghost towns often. Yes they rebuilt the Minneapolis Public Library (outstanding) and it has unbelievable stuff, but many suburb people have not and will not cross over the river and therefore have missed so much waiting for them on the other side.This also goes to Minneapolis and it's other twin city as they call it St. Paul, across another bridge basically, there are folks who wouldn't dream of going to St. Paul and that is another huge loss. One last thought, I do agree with the suburb folks that coming downtown (here) can be costly with parking. Another reason we need more public USE of transportation.

Maybe this will give you hope. It has helped strengthen my resolve.

Neglected areas in our city are my prefered lurking ground....they seem to be still whispering comments from yesterdays and yet any day now their walls will come down, ceilings are already gaping and yet even the old privet hedge will be grubbed up and within two hours all that will be left is chain-linked fencing, security notices and another plot to be sold off to the heighest bidder.....

what will it take to turn it back?
Destruction of what once was standing there and a rebuild
or
Persistant campaigning, endless talks with faceless beaurocrats bu most importantly of all, a good few batty, insistant obssesive pople who Just Will Not Let Go