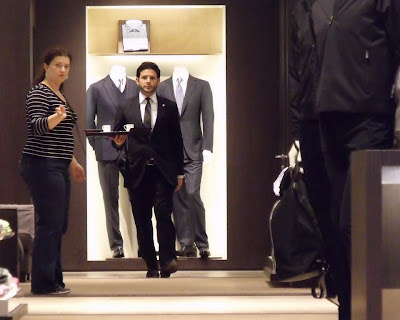 It's time to break a long-held photographic rule, the one that says you may not shoot strangers without their permission. Because to do so opens up a whole new layer of interpersonal complexity, with release forms and potentially irate mothers-in-law defining the two edges of the spectrum.

Since I began shooting, I've stayed away from pointing my lens at people I don't know. I couldn't be bothered with the hassle of obtaining permission, of explaining why, of being accused, in this litigious age, of being a stalker.

But something, perhaps a none-too-little dose of mischief, came over me while we were down south. Perhaps it was the total lack of structure, or the fact that I was out with the boys and we were in a grand adventure mood. But as we sat on a bench in the middle of the mall, this scene played out in the store before us. Before I knew it, my shutter finger was twitching.

Whether I should or shouldn't have taken the shot is almost immaterial now...I'm rolling the dice and posting it here because I like the result. My non-guilt notwithstanding, I was pleased to see that service still lives in the world of retail.

Your turn: You know the drill (if you don't, click here.) Shoot a stranger - with a lens, please - and post it to your blog. Drop a comment here, and share the joy with other participants by visiting their entries, too. Repeat. Drag your mother-in-law into the fray, because you know she secretly wants to take pictures of total strangers, too. Have fun with it, as we'll be getting ourselves into trouble with this one for the next week.
Posted by carmilevy at 2/10/2011 07:00:00 PM

Laughing myself silly with your caveat "with a lens, please". I'll see what I can do.

*quietly slips the Beretta back out of sight*

There's something pretty darn funny about those unexpected "stranger" shots. Throw in a maximum security prison and you've got yourself a recipe that's good for laughs for years to come.

I'll see what I can do....lol. Since I am working this week, it could be a good theme.

I went somewhere else. Hope you still find it fitting.

He looks impressive like Mr. Business, the girl I'm not so sure about... Anyway strangers away...check them out!

here is mine. Check out.. Who knows, you might wanna pack your bags and go!!

Lawyers and police go together in my post this week;

what a great subject, challenging too.

Here's my first one. It's good for a chuckle, I think.

Carmi, yesterday while out looking for ducks to photograph saw this woman cross-country skiing on the other side of the Owasco Lake outlet. On impulse took her picture. Checked your meme this morning thought why not.

its far too cold for me to venture forth to take a photo of a stranger, i will simply have to enjoy all of your strangeness...i mean strangers.

Good shot.
I gave up good manners a couple of years ago and have enjoyed capturing strangers unawares since.

And here's one more set from me:

Love your shot and the instructions therewith!
My stranger pics are here

Now that I've got mine taken care of, I get to check out all of yours. That's at least half the fun.

Here's my second one.
Strange Stranger

I'm a bit late to the game, but this is my first time participating. Your Gramma post in this round reminded me of one I shot in Memphis.

One more try, this time because the link didn't automatically format as a link.

Carmi, please forgive me for that dead link, and remove it if you can. Here it is, double and triple-checked.

Boy, I'm really blowing it on my first time in this Thematic Photographic thing.

Maybe this counts even though the face is obscured? We were waiting for a tube train in London this weekend....

A huge hug for you today, (can you feel it) and along with it, a second offering of stranger

My brother helped me out with this one too... he really gets around... this time... Geneva.

Here is my contribution for this weeks theme

Yes! taking photos of strangers is a definite conundrum! I have posted one of my favourite photos of a stranger. It was a public place, people snapping photos everywhere, and it is really hard to "identify" the person in the picture, but I still feel a bit guilty about putting it out there.

Had to have a second go at this theme:
More Strangers

One more from me..

This was also taken a while back.
I give my being in office the whole day, mon-fri as excuse for putting old pics. or may be I'm just lazy :P

Here are some more of my train related strangers

Here are "my" strangers