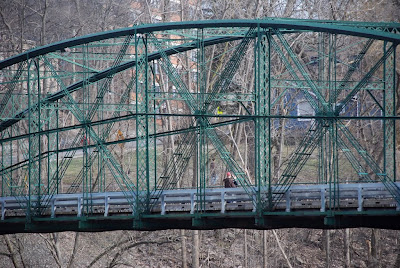 About this photo: We're still taking submissions for this week's Thematic theme, singles. Please click here to share yours. What does this photo have to do with singles? Well, single span, with a single person standing on it, taking in the scene. It made for one (sorry) peaceful moment of reflection.

London's Blackfriars Street Bridge is 136 years old, with a wooden deck that needs replacement every few years. My wife hates when I drive over it, worried this ancient piece of engineering will toss us into the icky Thames River below. By any definition, it's obsolete and should have been replaced with a four-lane slab of concrete decades ago.

But it hasn't. And that's a good thing. In a relatively rare feat of historical sensitivity, the powers-that-be who lead our fair burg have decided that this bridge is worth keeping. Interestingly, despite pressure to reduce its function to a pedestrian bridge, relocate it to a petting zoo on the edge of town or turn it into a backdrop for a water slide park, the city has long insisted on keeping it open to regular vehicular traffic. Despite the challenges associated with keeping a century-plus-old bridge fit for the modern world, it somehow works.

Sadly, another old example of civic engineering, the single-lane Sarnia Road Bridge, is headed for a somewhat less charming fate. It's a mere 121 years old, 102 of those years spent in its current location over some railroad tracks. The road it carries, once a near-deserted country lane, now finds itself in the middle of a rapidly expanding suburb. And that 'burb needs four-lane concrete slabs no matter how charming the bridge may be.

The Sarnia Road Bridge is scheduled for dismantling later this spring in anticipation of a major road widening project. No word on where it'll end up, but talk of using pieces of it to - and I'm not making this up - cover a steam engine makes me wonder if perhaps the petting zoo wouldn't have been a better alternative.

I know that preserving history costs money. For Blackfriars, the numbers always worked out. For Sarnia, not so much. But it still stings. Soon we'll have but one span remaining, and even then I wonder how long that one will last before the city's resolve finally runs out.

"Those who cannot remember the past are condemned to repeat it."
George Santayana

I think we preserve history because history serves as a check mark of where we were and shows how far we've come or NOT come..,.