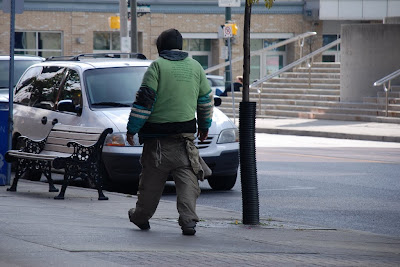 Man of the streets
London, ON, October 2009
[Click here for more stranger-themed imagery]

I struck a bit of a nerve with my street-level observation, Mumbling strangers in our midst, the other day. I didn't have a picture then, as it was icy outside and holding a camera in my hand just didn't seem like the smartest thing. But that moment got me thinking, and I thought back to this picture, shot a year ago October, when I was walking the comparatively dry streets of downtown London with a camera in hand, deliberately looking for scenes to capture.

I remembered this man because I'd seen him many times before. He's a fixture in and around the core, seemingly spending his days covering the same streets, over and over. He never seems to go anywhere specific - at least not that I can see - but I'm guessing that isn't the point for him. Rather, the goal seems to be to fill the time, to make the days go by, to get to another nightfall still standing.

When I took this picture, he seemed undecided about where to go next. This man who likely knew the streets better than anyone had just spent at least five minutes standing at the intersection, walking a few steps in various directions before stopping and reconsidering. He said nothing and approached no one as he worked the plan out in his head.

As I stood quietly far away and watched the moment, I for some reason found myself wanting to know what he was thinking. I don't think the picture gave me any more insight, but I'm glad I took it all the same.

Thinking little about his route or destination. Probably not even really aware of his direction. I would suggest he is just responding to nervous impulse.

till the drive to simply continue
returns and I walk on."