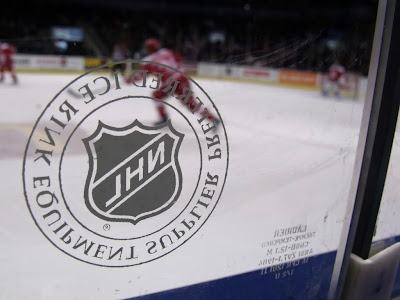 If you're a sports fan, today's a big day, as the National Hockey League draft deadline is today. So I thought I'd mark the occasion with this snippet from London's John Labatt Centre. Because I'm Canadian. And I'm pretty sure hockey fandom is baked into my DNA.

As we took our seats in this showpiece of a facility, the NHL logo stood out in my mind because the closest NHL teams play two hours away. It's nice to know our minor-league London Knights merit NHL-approved glass, even if they "only" play in the Ontario Hockey League.

Memo to folks in Toronto who pay a week's salary to watch their team extend their 40-plus-year losing streak by another game: You'd have a lot more fun here. There's just something about teenagers and early-twentysomethings building a future in the sport that they love that resonates more deeply than millionaire free agents. I'm thankful to live in a place where the love of the game still means something.

Your turn: Do you love a sport? Any sport? Why? Why not?

One more thing: I know that Canada's official national sport is actually lacrosse. But that's on paper. Deep in our souls, it's hockey.
Posted by carmilevy at 2/28/2011 06:07:00 PM

Ever since my daughter got into ice hockey- namely Dallas Stars, I've become a fan..omg... absolutely the best... fast paced, never a dull moment. When the playoffs were on a while back my neighbors are die hard Maple Leaf fans - they hale from Canada as well.

Hockey...love my hockey.
You can find me at my favorite "wing and beer place" on Hockey Night in Canada watching the double-header....until late spring:)
We ARE CANADIAN!

I love most sports. I was weaned on baseball. Take me out to the Ballgame was the first song I ever learned the words to. I was a lifelong Expos fan. :)
I love hockey too! Sadly, I am one of those whacky never say die Leafs fan.

Here's my FIRST contribution to this week's theme... a photo I took last spring while walking along Queen Street in Toronto.

I'll be glued to the Leafs today like white on rice.

I’m from Boston so the DNA baked into my blood also cries “that was not Fing icing!!!!” and “SKATE you bastard, My mother can move faster”. Both Bruins teams are 30 min away in opposite directions, the Providence Bruins (with school night) have tickets for $14 apiece and not bad seats. The Boston B’s…very pricy and I bemone the lost of the original Garden. The smell, the fights, the drunken splendor!!! I honestly don’t understand the lack of love to the sport.

thank you for the inspiration....