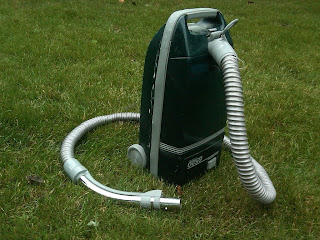 About this photo: It's Thematic's "singles" week. The cool kids are going here to join in. Just because.

I have a funny little tradition that involves taking pictures of things just before they're thrown out or recycled. I've been doing it ever since I got my first camera, but it really picked up steam after I transitioned into digital and started shooting everything in sight.

Like so many of my, er, habits, I'm not entirely sure why they evolved the way they did. I guess I discovered that retaining photos of things that were no longer around helped me build a bit of history in my head.

So when I see that picture of our old vacuum waiting to be picked up by the landfill-filler-person, it takes me back to the day we bought it, and how strangely adult my wife and I felt that we were slowly bringing our first home to life. It looked so forlorn on the last morning before it was taken away for good, and I didn't want it to disappear without so much as a trace.

In the end, it's just stuff, and anyone who knows me knows that I don't much covet stuff. People, after all, are far more precious. But the occasional milestone photo may not be such a bad way of reminding me why some people are as precious as they are, and why the journey we've taken together has been so charmed.

I'll go with that rationale for now.

Love the title. It made me laugh even before reading the story. I never thought about taking a photo of things being discarded until now...Thanks

Not so much of things like this, although I may begin to, someday. But what does make me pause is how (after going through older relatives stuff) that things like this vacuum can out live all our precious loved ones....people, animals, flowers, all these precious living forms(except maybe weeds) have such a short time in our world....grab every second you have......!

No, but sometimes I take pictures of other peoples "stuff" that they leave by the street for collection. Or at least I took a picture of the two toilets (pale blue and light sage green) left by the street. Does that count?