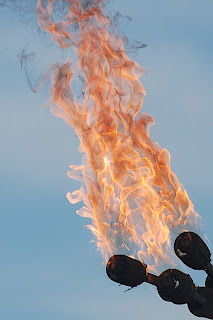 About this photo: It's Thematic's "playing with light" week all week long. You don't need to try the veal, but you may want to click over here to see what we're talking about.

We happened across this scene while walking around Quebec City - the only walled city in North America and a living example of history that two months after our trip there remains a constant topic of conversation among our kids. A large crowd had gathered around a street performer on the riverfront boardwalk. This particular guy was unusually acrobatic and unusually funny, more professional than hokey. Our kids were entranced. So were we.

It didn't take long before he was down to his skivvies - fleur-de-lys, of course - and riding a unicycle. A few bilingual jokes later and then the flaming batons came out.

I'm not an arsonist or a pyromaniac, and I generally don't end up entranced by flames. But this time, I'm figuring it was the late afternoon heat or the fact that we were in a unique place with friends who mattered, enjoying a day we knew the munchkins would carry with them for a while yet. Whatever it was, I zoomed in on the flames and let the fun begin.

I'm kinda glad I did. This picture takes me right back to that moment when everything was just right. I like when photography does that.

And the answer to your question - yes, all the time! Especially with my travel photos.
And I still can't look at some I took of a loved one who died of cancer nearly 3 years ago - they hurt too much. Maybe in a few years I'll be able to look at them.

Oh yes! Photos do that to me all the time. You took a great photo of the flame. I seem to get sucked up into the patterns of flame.

Happens to me all the time and one of the resons I started with photography was to leave a legacy in pictures for my kids and grandchildren. Pictures really are worth a thousand word especailly when it comes to triggering memories and feelings.
Johnina :D

I look at pictures taken when I was young.. and... thin... and smooth faced.. and...
I wonder why I thought I was so fat and unattractive.

Not really the question you asked, huh?