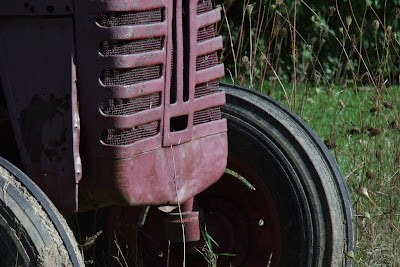 About this photo: We're exploring "it's in the details" this week, and you can, too. Just go here and it'll all make sense. Kinda.

The scene: I'm cruising through the countryside just outside London on my bike, trying to get back in touch with my green side before winter arrives and forces me off the road for a few months. I come across an old tractor sitting in front of a dilapidated farmhouse. I doubt the rust- and dirt-covered tools scattered around the tractor still work, but the hand scrawled "for sale" sign suggests at least one person on the planet still believes this pile of metal retains some kind of value.

That's the cynic in me talking. I roll on past the forlorn site. Then something makes me stop. A second thought, I think, perhaps even a pang of first-impression remorse. Maybe it isn't as worthless as it first seems to be. Maybe it deserves a second look.

I turn the bike around, park on the gravel shoulder and carefully cross the ditch to get a closer look. The battered, sun-baked metal wears years of hard work with a grace I hadn't noticed as I was riding. Even if it never tills another clump of soil, there's something here that I had totally missed when I first rode past.

I head back to my bike, fetch the camera from the bag and get to work. After all, there's a story to be told here.

I suspect I learned a valuable lesson on this day: You learn a lot more about stuff - and life - when you stop to take a closer look.

I learn what I missed the first time

It proves that taking a camera while biking makes all the difference!

We must be on the same page today. I decided to crack open and share the details of a biking story (with photos) for this week's theme.

Here’s one more for the road.

That's what I love about photography; you notice the details and the better photographer you get, the more details you notice.
Johnina

More of the whole picture! Needing to head off for work here but wanting to blog for a bit, totally forgot to really look at your triangle photo, yeah the wheel spokes but oh yes you were fixing your eyes, or directing our eyes to the shoulder and road.....there's always something we miss along the way..go back and look again! As for Mr. Faded tractor he is probably of finer grade materials and motor functions then the tractors they build today,(that often get more costly to repair) so he probably is a keeper.....! He's well seasoned!