Elan Gale has epic fun in an airplane 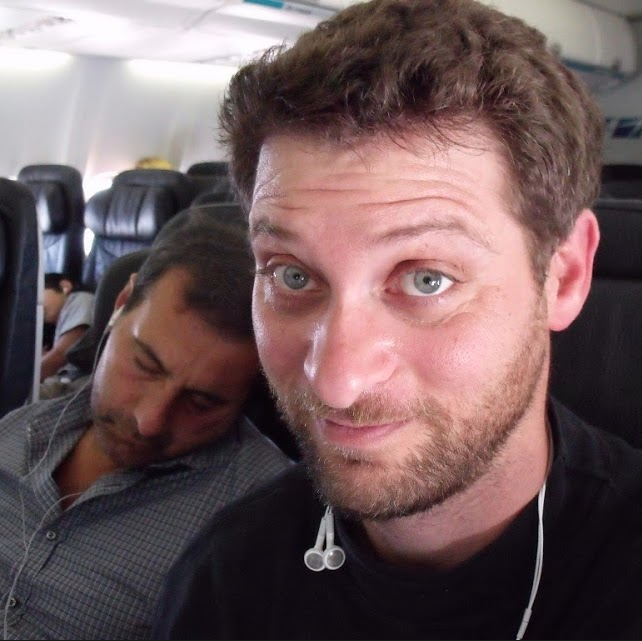 A couple of years ago I wrote about a relatively amusing experience I had with a man who, charitably, could win a bad-parent-of-the-year award with one hand tied behind his back. I wrote about the experience in this blog entry, The moron who slept on my shoulder. Go ahead and pull it up...we'll wait.

Ah, glad you're back.

As you can see from the piece, my response to being stuck next to him in an aluminum tube for a couple of hours was to passive-aggressively not confront him while in flight. I simply wrote about it afterward and kinda forgot about it. Er, maybe not: If you pay close attention to the Google profile pic that I use to this day - posted again for your viewing convenience - you can see him after I've shoved his sleeping head off of my shoulder. Say hello to the doofus!

Fortunately, the world is filled with folks whose response is less polite-Canadian and more let's-have-some-fun-with-this. Enter Elan Gale, a producer for ABC's The Bachelor, who had a run-in this week with a whining fellow passenger known as "Diane". He live-tweeted the experience, and since then his story has gone delightfully viral as frustrated travellers everywhere cheer for a guy who deftly did what they've always dreamed of doing.

Here's the blow-by-blow, craftily summarized by the CBC's Lauren O'Neil (As an aside, she's another must-follow for the digerati. Her Twitter account is here.) Buzzfeed also has the lowdown, here, as does the UK's Daily Mail, here.

Kudos to you, Mr. Gale, for using humor in ways we won't soon forget. Well played.

Update: Aaaaand...he faked the whole thing. I suppose I could simply remove this entry from my blog and pretend it never happened. Or I could update this entry and keep it real. Since I'm not a big believer in deleting something once it's been posted, here it is. I guess we now know another brilliant-yet-deceptive way to boost your social media profile - he had 35,000 Twitter followers when this started, and he's now up to 176,000 or so. But credibility? Not so much. Le sigh.

Several years we brought the school's dance group to dance at Disneyland. 75 fifteen year-olds in a plane, mixed in with regular people. Two of the boys sat next to a businessman who had the courage to fall asleep. He may never know, but there are several pictures of him, with these boys fingers at his nose, heads laying on his shoulder and who knows what else. That's why I never fall asleep on a plane unless I'm next to one of my siblings. At least then it will be someone I know doing all those things to me.

I read about this the other day, and while I appreciated it on the level of one-upping a bully, I felt that Elan stepped over the line of human decency when he ended the wine-accompanying note with his choice of words. Had he written that he hoped it would help her chill out, moderate, take a breather... whatever... but he ramped up the insults and indecency from there.

Your experience with the family guy (NOT!) was pretty awful. I don't fly often, and I don't like doing it, but I've never been in that bad of a situation.
My dad (normally a mild-mannered clergyman) did tell off a stroller-pushing father at Disneyland once after that man continually rammed the stroller into my dad's heel.