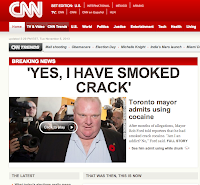 So it's official. After months of denying it, and after months of claiming to be the victim of a media-led witch hunt, Toronto Mayor Rob Ford has finally admitted that he smoked
crack cocaine.

The CBC is reporting he admitted it in the middle of a media scrum, and as you can see from the graphic, CNN is now leading with it:


“Yes, I have smoked crack cocaine,” Ford said.
“But, no — do I? Am I an addict, no? Have I tried it? Um, probably in one of my drunken stupors, probably approximately about a year ago.”

What really ought to happen now is the guy should do whatever he needs to do to fix himself. Between the drinking, the drugs and the questionable behaviours around questionable people, it's clear to everyone - except him, apparently - that he needs help.

Everything else is superfluous. It's truly sad to watch an implosion in the harsh light of public scorn. It's even sadder when the person in the middle of it fails to realize change is needed.

Once he does, we can all go back to dealing with issues that are a little more relevant to our everyday lives.

Rob Ford was a bad mayor. With or without the crack thing. If that's what it takes to get rid of him, so be it.
~

Was it the alcohol that was the gateway to Crack? It seems that every time he drank, it was to excess, and his behavior proves that.

Drinking a bottle of vodka, or whatever, it's not just one drink, but the whole bottle ! And he did that repeatedly. Drinking to excess every time, and also the fact that it led to crack.

Obviously there is a problem there. He may not see it as addiction or problematic.He has admitted use, and also admitted his alcoholic problem, yet he didn't go so far as to say that he is one or the other, an addict or an alcoholic.

You just don't smoke CRACK once and say oh, it was a passing phase, and I did it in the middle of a drunken stupor.

I can't openly define his problems, it goes against our traditions. But he does have a problem. It is when he owns up to those problems and seeks a solution that we know he's on a better track.

We can only point to the truth of his actions. His repeated excessive use of alcohol, and his dalliance with Crack. It doesn't get any better. it only got worse.

He did not stop with the bottle but moved on to a crack pipe. That is going from bad to worse, I think. Don't you???

"I did it, but I was so drunk I can't remember" is a great defense! (sarcasm)

He is such a mess. Now with that video coming out. Yikes.