Grab a look before this bird is fully extinct

Disclosure: I'm a bit of a plane geek. Way back in the dark ages, before the Interwebs, I used to read every aviation-related book I could get my hands on - sorry, they were way more interesting than comics. I studied the theory of flight because I wanted to understand the magic that allowed hundreds of thousands of pounds of metal, glass and related exotic compounds to lift off the ground, travel near the speed of sound for countless hours, then land safely clear across the planet before the food on board had a chance to get stale.

Once I figured out the physics thing, I dug into the planes themselves. Plane spotting was my way of making aviation an everyday thing. I wanted to look up and know precisely what I was looking at. I wanted to know the story of the particular plane, the company that made it, the things that made it special. These weren't just flying examples of the most cutting edge science and engineering known to humankind. To me, they were works of art. So it was okay to stand on the ground and admire them for what they were. 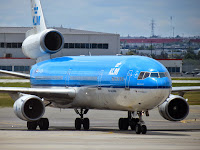 Fast forward to today and I'm still standing on the ground in awe. And I'm still plane spotting. And sadly, many of the planes I spotted as a kid are no longer flying. The star-crossed McDonnell Douglas DC-10, for example, recently retired from passenger service. Its successor, the MD-11, continues to fly, but in dwindling numbers as airlines shift to increasingly fuel efficient twin-engine aircraft like the Boeing 777 for long-range routes.

So when I saw this particularly lovely KLM MD-11 taxi toward its gate at Toronto's Pearson International Airport last month, I knew it might be one of my last opportunities to record the moment. For all the wizardry of modern twinjets, they just don't have the panache of this near-relic. That third engine, stabbed through the vertical stabilizer, is iconic. The way this thing floats during approach also makes it easy to spot. So it was an easy call to drop my bags beside the bay window and start shooting. Belated apologies to the stranger with the Dell laptop who could no longer focus on his Skype call because he thought I was breaking the no-pictures-in-airports rule. 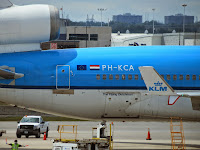 For the record, an MD-11 is based on the DC-10, with a stretched fuselage, winglets on the wingtips, more efficient engines, a smaller empennage, and a glass cockpit. It is the last remaining trijet in the skies following the retirement of the Lockheed L-1011 from commercial passenger service. An Air Canada L-1011 was the first plane I ever boarded - on of all things a winter day camp field trip to the airline's maintenance base in Montreal. The 7-year-old me didn't want to leave the plane, and I've been smitten ever since. Seeing an old bird like this reminded me of why I first thought flight was something more than just a way to get around.

Oh yeah, I know a little bit about those plane geeks, as my hubby is one too! He's had his time flying, and has thought about renewing and getting back in the game. A friend has a plane for sale, yikes!

Right you are, Carmi! KLM is 95 years old as a company. The editor of the magazine I write for recently reviewed KLM's 747 service. He too wants to fly the farewell trip on the MD-11.

I remember flying around on those triple engined planes too.

On one occasion we were at Stuttgart and the pilot said he was having some trouble with the third engine, but not to worry, the runway was down hill slightly and we only needed the engine during take-off.