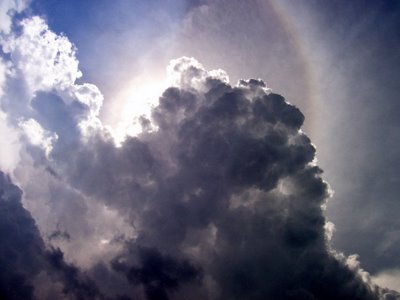 The day was hot and humid, with ominous black clouds threatening in the distance. My daughter was attending a birthday party at a local water park. I originally planned to drop her off and return when the party was done. But something told me I should stay close by. I guess it's the lifeguard in me: trust my own instincts instead of anyone else's.

So I walked the grounds, keeping an eye on our little girl, half an eye on the threatening clouds, and an ear tuned to the expected sound of thunder. Just before the first clap of thunder forced the lifeguards to close up shop, I pointed my camera straight up, dropped the aperture as much as the point-and-shoot digicam would allow, and squeezed off a few images. The sun was so bright that I could barely compose the shot. The LCD screen was washed out, and the viewfinder wasn't much help either.

Yet somehow the picture worked, right down to the atmospheric rainbow just above the cloud. Even a frightening scene can be inspiring to those who take the time to look up.

Your turn: Can you share a story of an extreme weather event? How did you feel just before things slid downhill?

OK, so on Sunday late afternoon, my family and I were driving to church (I wanted to watch Wimbledon in the morning!) and suddenly I looked up at the sky and the clouds looked exactly like your photo! I couldn't stop commenting on the clouds and staring out the window, which prompted my daughter to say: "Jeez, Mom, you are so obsessed with the weather! Stop talking about it!" Ah well.

I remember once a few years ago, driving from Montana to Louisiana. I had just entered Kansas, and saw one lonely cloud that looked very strange. Within 30 minutes it had turned into a funnel cloud, and I pulled into a local motel and asked for a room. The clerk gave me my key, and told me if I heard the sirens all the guests where suppose to meet in the boiler room....she was leaving, to go home and get her children and go down to her root cellar. I spent the next hour in complete fear, with no phone service, no way out, and no idea if the hotel would still be standing when this horrible storm passed. Scariest thing of my life!

Last summer, as Katrina was rolling in and was, at that time, nothing more than the usual summer threat, my daughter and I stood outside marvelling at Mother Nature. As the trees bent and the sky darkened, we took it all in. For those brief moments, we were in awe of the beauty of an impending storm.

Hi Carmi - not sure how I know you - think maybe HDI Toronto way back when?

Anyway, your picture reminded me of a gray, cloudy day in Jerusalem when I was driving out to Hadassah Hospital Ein Kerem. Ein Kerem is in a valley and I was driving down from the hill Jerusalem sits on.

The clouds had settled into the valley below me. It was a truly awe-some sight. As I was driving through them what came to mind was this must be similar to what the people waiting for Moses to descend the mountain would have seen.

Carmi, I lived 15 years in hurricane country and I've seen my share of that frightening piece of nature's fury. I've been in horrendous ice storms and a noreaster, and a 28 inch blizzard here in Colorado. Hopefully, I'm done!

We here in Buffalo are accustomed to the occasiona sh*tstorm. About ten years ago we were trapped by a few feet of snow. To continue on your previous topic, we actually spent the night playing soccer in the attic of our sh*tty post college apartment.

An errant shot knocked the stereo off of its perch. Our friend's girlfriend broke her arm, tumbling down the stairs trying to save it.

Now THAT was tragic... (wink-wink)

Hurricane Andrew hit FL in 1992.
We just sat there, waiting, prepared as possible, wondering how much would come our way or not. The skies were so quiet and eerie, as were the deserted streets. It's an eerie peace, that half of you appreciates, and the other half wants to be over.
~S

I was six. There was a tornado that ripped through our neighborhood. I remember hiding in the bathtub with a single bed mattress over my head as my Mom squashed me into pieces. Later, we emerged. The neighbor's house was destroyed, while ours had nary a scratch - with the exception of the little storage shed out back. It was laying at the bottom of a very steep hill and what I remember most is my little potty training toilet laying in the mud.

Funny what we remember most.

What a dramatic photo! I slept through the worst weather event here in Raleigh. A tornado swept through the city in a diagonal path and took trees out by the hundreds (in our yard also). I woke up to no electricity and when I looked outside, I couldn't believe the devastation in the neighborhood. All I could do was cry.

Nice picture of a beautiful sky.

Looking out my 17th story windows across Westmount Square, it is fascinating to watch weather move in.

Weather usually moves in from the West around the mountain which is to the North and West of our view. the other night I was home alone and I could see dark clouds moving in,I raised the blinds and stood there watching the lightening dance between the clouds and the land and buildings below.

It took about 20 minutes for the clouds to move over our area above our building and the location. Watching the lightening touch the ground and building tops is amazing.

Just the same. On a clear night when the air is crisp, the night of the first snow of the season, everything is quiet, as the clouds whip across the mountainside in rolling fashion, as if there are pillows of cotton in the sky heavy laden with snow.

The clouds move in an almost "Cecil B. DeMille" fashion across the sky and envelope the view in all directions.

Then as if on God's command the first flake falls - and it begins. From this high up, watching snow fall is like watching a painter paint. You never know where the first flakes will fall and how they will change the landscape below.

It is then I usually go out side and I welcome (her)the snow to the city - as if in prayer of thanks - now everything will get quiet again after the noisy Summer and fading Fall.

well thank goodness i have not lived thru a hurricane or a tornado... well i have actually lived thru a tornado but i was only 2 days old!
we've had some pretty wicked weather here in ohio the past 2 days.... it's gone around us each time... maybe i ought to be out there snapping pix of the clouds!

When I was 4 years old my family travelled to Ontario Canada to visit relatives. There wasn't enough room in the house for all of us so my brother and I were relegated to the guest house, which was really more like a playhouse. In the middle of the night there was a horrendous noise that woke us both and, quite frankly, scared us to death. We high-tailed it to the main house where we slept the rest of the night. In the morning we found out it was a twister making the noise. We also found a huge tree had fallen on our 'guesthouse' and crushed it.

Well, there was the evening in the basement when the tornado blew down our street and imploded the church next to our parsonage... that was in Gary, Indiana.

Then, there was the heat wave in January with severe thunderstorms and tornadoes, followed the next day by a 36 inch plus blizzard...it snowed for four days.... also in Indiana.

Tornadoes in May, during my baby shower... sirens went off eight times in three hours... Oklahoma.

Oh, yes the straight line winds in February that took out the electricity for ten days, the phone for two weeks and cable for a month. That was in Mississippi.

I managed to avoid the hurricanes in Mississippi and wasn't here in Virginia Beach yet when the tropical storm went through but now it's just a matter of time.

Hmm... looking back... it's no surprise that my daughter, Nyssa wants to go into meteorology.

My story? A few weeks ago we popped up our new tent to check it out. We headed out to take it down just after getting the kids settled in bed. When we began the task the sky was merely growing dimmer with dusk. By the time we were folding the tent and squashing it in the bag, the sky was blackened by storm clouds and rumbling with deep thunder.

It was a bad, windy, violent storm.

wow, that is one beautiful picture!!!

The one extreme weather event that comes to mind was the time I was walking with friends near a canal in Belle Mead, NJ. The sky looked threatening, and I heard a sound like a freight train...and I just took off running! It was scary!!!

oh man. you reminded me of driving from Utah to Phoenix near the end of April about 11 years ago. It was pitch black as I ascended higher and higher into the mountains. Then it hit. A snow flurry that was blinding. Luckily there was a semi truck in front of me guiding me like the North Star.