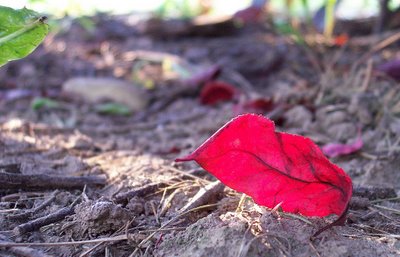 We have a red-leaf hedge behind our house. It faces north, which means the setting sun casts interesting sidelong shadows through the fence - at least when I take the time to look at them.

When the leaves initially grow out of their buds in spring, they're quite a rich shade of red. Every year, I mean to capture them with my camera and, every year, I neglect to follow through. The ground is usually snowy and/or muddy, and as a result I never seem to get back there when the color is at its brightest. Sadly, their surfaces become more dusty-looking as we transition into summer. Eventually, there's little reason to meander over to the hedge for a closer look. The brilliant color has simply faded into a shadow of its former self.

Last week, while tending the BBQ and trying to avoid a culinary meltdown, I noticed a glint of red coming from the ground. I wandered over and saw this lone, fallen leaf in the parched earth. I'm not going to get metaphysical on you and say that it was a sign from above. But I ended up with a series of pictures of brilliant red that I wouldn't have otherwise had. I'm glad I took the time to look, and to wander.

The green leaf, the big brother, if you will, was a counterbalancing bonus. I silently debated whether I should include it in my little vision of red, and ultimately decided that it made sense to have it there. These two bright swaths of color just seemed to work so richly against the bare background with the slash of light through it.

Even better, our supper came out really tasty.

I do believe in photographic fate. Unfortunately, I just never have a camera with me when the opportunity strikes.

That's just lovely - so glad you kept the glint of green in - I really like the balance.

I believe in all kinds of fate, my friend. Trouble is, fate has been failing me these days. here via Michele!

Yes, I do, like the duck in our pool photo I posted last week. I am not usually so quick to take advantage of the opportunities, though.

I think when you start the addiction of digital photography you start framing in your mind's eye everything that attracts your attention. At least I do. I keep thinking it might make a nice photo and that is why I always try to carry my camera.

I likes this picture. I liked the compostion, the two leaves in sharp focus against the rather mushy impressionistic background.Red and green are complimentary colors on the color wheel. The red leaf looks a little like a fallen pair of lips.
I don't know Michele and I wasn't sent by her but if you're feeling invaded upon you're welcome to visit my sight @ cheetahthinks.blogspot.com. Michele is welcomed to come too.

Beautiful image. Bu it looks like fall is here.

Hi Carmi,
Michele sent me :-) and I will be back to check out your blog v. soon.
That photo is amazing. It's people like you who are helping me stop and see these little landscapes. I'm not quick enough with the camera to take them myself.

I use to always have a camera with me and caught a lot of those "photographic fate" moments. But I don't shoot nearly as many pictures these days, perferring words to silver images.

Michele sent me back, Carmi, but I am always happy to stop here.

I love my camera Carmi, however I'm not the photographer that you are. Scenes do call out for a shot, some times they're so fleeting; passing by on train trips with certain lights/ times of the day/angles and people that I would have to have had the camera just waiting in my hands. These ones stick in my mind and the feeling of them well up and embed on the next fleeting perfection witnessed - a palimpsest of evanescence.

Yes, I believe in photographic fate. Sometimes, the images I see around my have me SCREAMING inside for a camera.

Here from Michele's this morning.

I normally carry a camera of some sort. A tiddly Nikon in my bag, a slightly larger Panasonic which is my weapon of choice or sometime a whopping Nikon D70 which gets me thrown out of events. And then there's the camera on my phone. Obsessive, or what?

Here this time via Michele's!

The leaf looks gorgeous, once again you have captured nature at its best!!

I have got to get a better digital camera, first of all. For some reason, the stark contrast of this photo really grabbed me. I want this one framed!! Seriously!! Of course it helps that I am infatuated with all things red. =)

I love the way you can write so beautifully about something as simple as two leaves. ANd the photo is amazing! Thanks for sharing your talent.

I also believe in fate. Things happen for a reason. And I usually discover that reason on down the road somewhere.

That is a great picture....what a rich-looking red color!

The bit of green leaf peeking in makes us appreciate the red leaf even more.

Great depth of field. With training certain pictures the mind can pop forward as you mentally frame them. ideally you have a camera with you at the time.

Yes, I do believe in photographic fate. I've been fortunate to have in the right place at the right time with a camera and got my images. But there have been those that got away.

I believe in photographic timing. I also believe that looking and wandering are the most important step in the creative process (the first) without the looking there is no picture.

What a gorgeous photo! And I, too, believe in photographic fate. It's amazing how things just (literally) fall in your lap sometimes.

I need to keep my camera with me at all times. I'm bad about that. I need a smaller camera, actually. That would help!

Here via michele today, my friend!

I have a ton of pics that seemed to set themselves up for me. The first was when I was 6 and I was using the polaroid my grandfather left for me. We were at the CN tower and I got the most amazing shot of it. I wish I knew where that photo was.....
Anyway...michele sent me, but I was lurking earlier anyway.

Certain scenes definitely do demand to be recorded.
Here from Michele's this evening.

Photographic fate is why I bought a combo cellphone with camera and video capture. Love the picture Carmi :)

Oh yes, but the fates seem to be avoiding me right now. I am in a photographic depression. Hopefully, it will lift soon.
Here from Michele's

I absolutely believe there are moments of imagery that demand, not ask, demand that we capture them.

Hey Carmi, did you try and come see me from Michele's? Something weird is going on! You, Margalit and Tracie said they were coming but no one did. I'm wondering if my commenting is broken... :(

Most times, the perfect photographic moment happens when I do not have my camera.

Here via Michele's this afternoon :)

I absolutely believe in photographic fate. When I lived at the beach I used to walk the salt marshes and there were so many magic moments that appeared: geese flying over my head, deer, white snowy owls, even loosestrife blowing in the wind.

I wonder what kind of bush that red leaf comes from. It's lovely.

I love the contrast between the bright red and the dull mud. To me, a shot like this is more interesting than one of an entire tree.

BTW, you always leave the best comments. Thanks, Carmi.

nah. i'm more of a believer in being prepared!
though i'm also a lapsed preparedian, as my battery always seems to run out at the crucial moment lately.

i love those red leaves.. dog shit alley down the road has one wall of them, and they did look amazing in the snow though my battery was obviously run down all winter as i've no pictures of that either.
bah humbug.

well done you for capturing it, and not burning the food in the process (another of my faults... though i've learnt to be prepared to always have to cook a second batch ;)

I love the colour of the leaf. It's one of my favourites...I think being a photographer is part fate, however it's your expertise and your creativity that makes your photos so spectacular!

Oddly enough... the most recent photo on my photoblog... is a lone red leaf from a flowering pear tree. Spooky, or photographic fate?

I love that pic, Carmi. Beautiful!