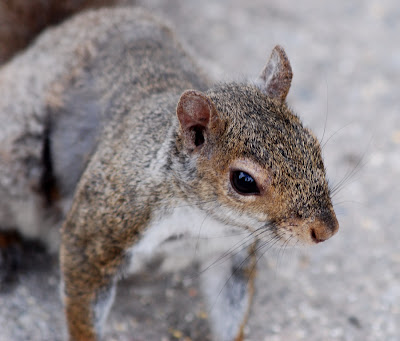 Not a pet
London, ON, July 2007 [Click for an extremely large squirrel head]

When I was a munchkin, I had a weak spot for the animals who lived in the neighborhood. So for a spell, I would leave tupperware bowls of milk on the front landing for the stray cats. It didn't take long for them to set up shop under our front porch, mewling and baying until all hours of the night. Not pretty. Soon after that, my parents nicely asked me to end my feline milkman career.

Later on, I would leave nuts on the back deck for the squirrels. This lasted until the day that I was a little late getting home from school. My mother noticed a particularly aggressive squirrel attaching himself to the outside of the screen door. Apparently, he was hungry. Quite certainly, my mother was not pleased. They may look really sweet, but they're likely the most troublesome critters you'll ever meet. So like the cats before them, the squirrels were cut adrift.

These days, I take pictures of them instead. They're hellish to shoot because they move so damn fast. But once you get used to their rhythm, you stand a pretty good chance of bringing home something more or less in focus. At least that's what I convinced myself as I painstakingly followed this fellow around and tried to avoid freaking him out in the process.

Because common human names are hilarious when applied to furry creatures.

in the hills of wEST vIRGINIA,they would call him "dinner"... hehe

Squirrels sort of freak me out. Great shot though.

Thanks for stopping by my blog.

How about Rocky...or am I dating myself?

Agree. They are nasty little creatures. And when they are pissed, watch out! Here via (the now-very-strange place) called Michele!

I don't have a good name for your squirrel, but I'm reminded of the London comment that pigeons are flying rats and squirrels are rats with good Public Relations.

Actually, the red squirrel is becoming an endangered species in the UK, because of the onslaught of the North American grey squirrel which is gradually taking over.

I'm with Carli. Name him Jeff.

Whiskers, 'cause he has 'em.

(I see it in his whiskers!)

Have a good weekend!

i have a great squirrel stew and dumpling recipe...

We feed the squirrels regularly at my house. My son doesn't eat his bread crusts, and the squirrels are fond of the PB&J on the edges. They will eat pretty much anything I set out there...tortillas, strawberries, bananas. They are not agressive and stay away from the screen, but they do come down regularly looking for their daily handout. Sometimes, there is none, and they stare at me with a baleful eye.

We had 2, one had a baby, so now there are three. My husband has nicknamed one, the male, FB, for fuzzy....well, you can figure it out yourself.

Just finished Harry Potter a couple of days ago - kinda like the name "Tonks" she was a fun character in the book. Squirrels are fun to watch - enjoy your untamed pet.

The first thing that came to mind was munchkin...just because you made me laugh when you said it.
My mother-in-law has a sqirrel that climbs up on her deck and the kids feed him peanuts.. Shame on you people that call him dinner! LOL

I used to love those buggers till they destroyed my plants. I was trying to grow chilli and they ate it all up. Now I have a love/hate relationship with them.

I am sure if you called michele here instead of me, she would suggest a nice name.

I refuse to look at him in the eye even though he is kind of cute.

PS: You must have in a hurry as you posted comments for 'Marie Antoinette' in the previous post 'One'.

I agree with Carli and the human names given to furry animals thing, but I think he looks like a Larry. Or a Pete.

And that shot, Carmi, is awesome. Such timing!

My mom loves to eat squirrels.

I think you should call him Skippy.

I call them furry little beasts....I just blogged about this a day or so ago. They have attacked my bird feeder.

Great photo, cute animal, nasty tempers! Reading some of your comments reminds me of my cousin who used to hunt squirrels. I remember having some for dinner once, as well.

Carmi: Jann. Because then youleave it up to the name user whether it's pronounced "Yahn" (Scadinavian) or "Jan" as in the surf band Jan & Dean! You are awesome with a camera!!

He is adorable, Carmi....But I know they can be quite troublesom, depending on the circumstances...(lol)

Why not call him a name that no one would ever think to name a squirrel..Like. Issac..Or Soloman! I knpw that sounds silly in a way, but in another way, it means you take him serioisly, you know?

OOOPS! I forgot to say Michele sent me tonight, my dear!