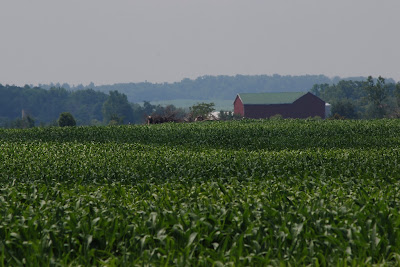 I've been taking my bike into the country this week. We live right near the edge of town, so after a few turns through the burbs around my house, I head for the main road and leave the city behind. I trace a long, big rectangle through farm country, blasting past fields of corn and pastures with horses and cows.

I kept my bike home today. There's a murderer on the loose. I know, alleged murderer. Whatever. He's a 22-year-old named Jesse Imeson. He's suspected of killing bartender Carlos Rivera in Windsor last week, and an elderly couple, William and Helene Regier, in Mount Carmel near Grand Bend, on Monday. Ontario Provincial Police have launched a manhunt for him in farm country, and they've issued a Canada-wide warrant for his arrest.

I look at this picture, shot just a few weeks ago in a beautiful little town just a short drive from my home, and it doesn't seem right that murder can visit such a beautiful part of the world. Indeed, how often do we all hear that "this sort of thing doesn't happen here" after a particularly grisly crime in a previously-peaceful part of the world? I guess there's no such thing as safe sanctuary any more.

My route into farm country takes me close enough to the manhunt zone that I worry. Am I being paranoid? Quite possibly. Can you ever be too careful in this freakishly unfair world? No. So tomorrow I'll hit the road again, only I'll go in a different direction, and I'll keep an eye out for the pickup he supposedly stole from that poor couple. I'll head back to my regular route only after this moron is caught. Or shot by a really good cop. Whatever.

This is why I never became a police officer: I'd find it difficult to resist the urge to pull the trigger if I cornered the cretin. I guess that compromises my ability to get into heaven. Again, whatever.

Your turn: Thoughts? Mine involve praying for the victims, and hoping there are no more before this is all over. What do you think?

Update - August 1, 2007: They caught him. He managed to drive clear across the province - 600 km from here - before ditching the pickup he stole from the Regiers in a woodlot in eastern Ontario. The search shifted dramatically when the pickup was found, and last night, he was finally captured after breaking into a cottage in Portage-Du-Fort, Quebec, just across the border. Good. There is no justice in cases like this, of course, but it's nice to know he's off the streets and can do no more harm.
Posted by carmilevy at 7/24/2007 11:38:00 PM

not sure if it is prayer or just good thoughts...but I do frequently think of the families left behind. I would never want to have to deal with that kind of grief. Fear is good or I guess I should say common sense is good. You never know what people are capable of doing.

You're right, Carmi. It doesn't seem right that someone so evil could be in such a beautiful place.

I do not think you're paranoid, just cautious and safe.

I too hope that they catch him before he can hurt anyone else. I also wonder what makes people do things like this?

Yes, living in Miami we hear a lot of this. A friend of ours lost his daughter when she moved from Miami to small-town Georgia some years back. She had been missing for 9 yrs. when the man who murdered her bragged about it in prison a couple of years ago, so he's locked up longer now.

I'm praying for this family you wrote about because I know how devastating it is.

So many thoughts run through my mind concerning this story...thinking of the families of the victims, thinking about the people who live in the community where that older couple were murdered, thinking about whether or not this guy is heading to Toronto (perhaps a larger city is a good place to hide?)

I couldn't help but think of the movie 'In Cold Blood' when I first heard about this story in the news.

It's very frightening, to say the least. I won't feel completely at ease until this guy is caught. But he is just one of many dangerous people in this world. These guys (because sorry, they usually are guys) don't wear signs that say "I'm harmful". One has to trust one's gut, be careful, and yes, there is nothing wrong with having 'The Gift Of Fear' (a very good book written by Gavin de Becker).

It is unfortunate that evil can be present there, but it creeps in everywhere sooner or later. I think prayer, good thoughts and support for the police will help, aas well as support for the families of the victims.

Sometime back in a village near Delhi, 23 skeletons of children were found in a drain. Those kids belonged to the poor families and the police had not registered any missing reports even though the parents had run from pillars to post.

When those skeletons were found, the authorities woke up. It led to two arrests but it seems nothing is going to come of it. All those children had been sexually molested and few had their organs missing.

We will never understand what makes any person evil.

I went to school with Jesse- He was a pretty good kid. Sure he got into some trouble, but never anything big. He's done wrong now, and he needs to be punished for it. But please when you say cruel things about him, remember your kid and grandkids, or neices and nephews- you never think they'd do a thing like this either.

It's certainly not like it used to be - or maybe it is but now we hear more about these things with our "instant" media. I live in a small NH town as you know - and for the most part I feel safe...but, I am also cautious and careful...and while I have traveled alone to many big, big cities - I've never been afraid but then I don't go to places that don't look "safe" to me at some weird time.

I, too, think of the families left behind...and guess I'm not any closer getting to heaven - cause my thoughts are not to waste money on a trial - just shoot the sucker!

Yes – this person has committed horrible, horrible crimes. He has taken lives, and ruined the lives of many others. He has forfeited his privilege of being a free citizen in our society. He should be caught and punished. But I do not see the point in taking another life to resolve this situation. It will not bring back the lives of those murdered.

Remember what Confucious said:
"Before you embark on a journey of revenge, dig two graves."

I think it’s a tragedy. I too will pray.

Re: the picture – it reminds me of the summer I spent in South Dakota when I was 12. There is no landscape near where I live in suburban Los Angeles that looks like that picture, or what my aunt and uncle’s ranch looked like all those years ago.

Hi Carmi...I heard this news and havent followed it today. Very scary and upsetting. it reminds me of the terror people felt in New Brunswick when Alan Legere managed to escape and went on another killing spree. You could smell and feel the fear in the air. It was awful

He's now in a dungeon rotting somewhere in BC.

i hope they catch the bastard.

I suppose we all have a type of impression that bad things don't happen in small towns or rural areas, but they do.

These sad and senseless acts have certainly turned Huron County upside down. . .and for what?


I just hope that the families and friends of the three victims can someday find peace. It is sickening. My deapest sympathies are extended to them.

Let's hope they find this wacko asap, before he strikes again. He is so desperate, he has nothing to lose.

There are many bad things that happen in the world but a life lived in fear is no life at all. I think that is why we have great coping mechanisms as humans. The trick is to find the balance. I hope the families get the support they need.

Looking at that beautiful landscape, it seems so surreal that such an ugly act could occur in those surroundings. It would seem the beauty of nature would trigger something in the human brain to curtail its evil thoughts. I suppose evil blackens out all that is beautiful and good however.

I hope they caught him!

I can empathize with the Anonymous comment. I've had a relative that did a horrible thing and we know it was horrible and we wanted him punished (which he was) but he was still a family member and the pain felt by his mother and siblings was immense. There is much guilt associated with loving someone society deems horrific. My husband still loves his brother, he abhors the crime that was committed, but he loves his brother. It's very confusing and heartbreaking. So many victims are scattered around when a crime is committed...

Families don't just stop loving. We still visited him while in prison but agreed that justice should be served upon him as well.

I hope for justice in these crimes as well.

carmi, i don't think it is the least bit paranoid. i would avoid the area too. people do horrible things to each other and this person allegedly has a history of it. better to be safe than sorry.

thanks for stopping by today! :)

I think I am happy that my state of Oklaoma has the death pentalty for crimes like this.

and, you are smart to play it safe.

Hi, Carmi - I live on the north side of the search zone, about 2 hours from London in a small town amidst a mostly rural area. This certainly has had my stomach in knots and I haven't slept well over the last week, and I am more careful and aware of who I see and what I do.

What really hit home is that the couple who were killed could have been my parents who have a rural acreage.

I think the major fear around this whole thing is based not only on the horrifying crimes, but also on the seeming randomness. I don't know the statistics, but the majority of murders in Canada are by committed known parties... this is totally 'out there' as far as how it could play out.

There is definitely no such thing as complacency these days.