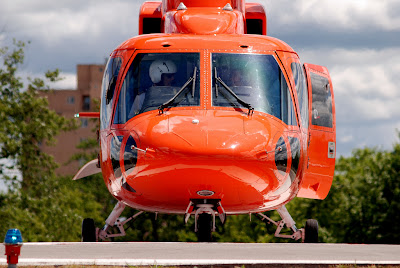 The birds of Ontario's air ambulance service, known as Ornge, are a familiar sight in our skies. Whenever I see one flying overhead, I often think sadly to myself that it's likely heading out to an accident scene, and I'll be reading about it in the paper tomorrow. 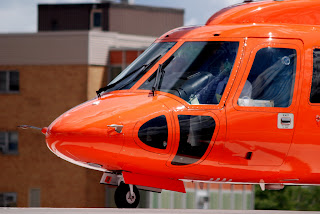 The major hospitals here are equipped with helipads to facilitate emergency airlifts and patient transfers. As I passed by the hospital's campus on a bright summer's morning, I noticed the helicopter sitting there and thought I'd stop for a closer look.

While the flight crew walked around the aircraft and checked everything before taking off, the flight nurses arrived with a gurney. The relaxed pace of the work suggested this wasn't an emergency run. I felt relieved. 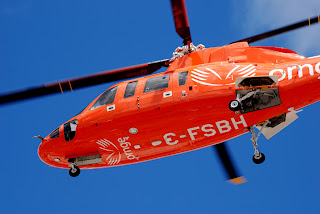 Soon enough, they buttoned everything up and returned to the sky as I moved around the parking lot and captured whatever I could. I said a quick thank you that I had my camera with me, and that it had plenty of battery and tons of room on the memory card. While it may indeed be a shlep to carry this thing around with me, sometimes it pays off.

Your turn: Please discuss a picture that you took because you happened to have your camera with you. Or one that you missed because you didn't.
Posted by carmilevy at 7/21/2007 12:13:00 PM

Michele sent me to read about the Orange...

Our Search and Rescue are RAF based and have bright yellow helicopters...and reasonably near an estuary we see them quite a bit around here.

btw - saw the gorgeous photo of your beautiful wife further down your blog....you're right, you're a lucky man......[big grin]

I feel like I miss shots all of the time! Either I do not have my camera with me or I feel uncomfortable in the situation to stop and get my camera out. It can be frustrating... but I really try to realize that the moment can be still breathtaking and wonderful even without a photo of it.

On twp occassions when I lived out west, I was privileaged to be in ER when they transferred a patient to a chopper for a flight to a larger hopsital in a larger city--those crews are amazing as they transfer the patient from the hospital's life support to their portable units. It's amazing--and in both cases, they were successful in saving a life. Thanks for the pictures and for the good thoughts you have for those who do this kind of work--here from Michele's today.

I love this question! My life has changed in that regard with the cameraphone. I always have my phone, esp. when out walking, and it is so easy to capture a photo and send it to my e-mail. A recent time I was glad I had it was in the grocery store last Saturday. I am on semi-retreat at our temple in MD where I lived from 1987 - 1997. I ran into a friend I had not since since I moved, and was able to capture the moment thanks to the phone. Michele says hi!

Ah! A picture that I took...
Please visit my blog for the one that qualifies. First thing you see.

Stopped in from Michele's.

I suppose some creative person refers to those choppers as "OrangeAid." Right?

Hi, Carmi. I'm a cheater from Michele's. shhh...our secret. I liked a comment you left on one of the blogs concering a book. I then realized that I have been a reader of yours off and on...so glad to have found you again. The pictures are beautiful. Happy Weekend!

Your photographs are..err...picture perfect! That shade of orange on choppers look damn good.

Wish those were used here too in the hopitals. We still have a long way to go. As long as people go around passing the buck nothing gets done in India.

Hi Carmi...No one sent me, but me! (lol)
I love these pictures, and I love that you have this so very wonderful and recognizable service in Canada....My admiration for all of the emnergency services people is HUGE! Wonderful picyures, as always my dear.

To this day...there is a picture that I have in my head...a sight that I saw when stopped at a Red Light...And did NOT have my camera with me. It was probably 12 years ago or more, maybe 15....THere was a homeless person sitting on a Bus Bench with his overstuffed cart of belongings right next to him, and he was talking on a cell phone. THAT was, at the time, an amazing thing to see. It wouldn't be now...but it was back then.

gah.,.. I love that first one. Wonderful shot Carmi

I took some great pictures today at a restaurant in Lawrence, KS...I normally wouldn't have done so, but having my camera handy, AND the uniqueness of the place lent to the urgency of photo taking. I will be posting photos shortly - must unload the card and do the edits first...but check my blog later on and you'll see!!!

Michele sent me, though I'm here every day!

thanks fo he compliment carmi

Your last picture from beneath the chopper with that beautiful blue sky reminds me of a missed opportunity: when President Nixon died and they flew his body in Air Force 1 directly over my workplace. The plane was coming in for a landing at El Toro Marine Corps Air Station, and seemed to be close enough to touch.

those are great pictures...I am one that sends up a little prayer when I see an ambulance and such.

I pretty much always have my camera since I have the room in my diaper bag!

i loved shooting chopper pics during our fire days. They look like big flying bugs.

was looking for you from michele's - did i get missed?

Those helicopters are such beautiful toys--and tools. They save lives and look so pretty at the same time.

My boss is a doctor at UNC hospital and it has a trauma center so there's helicopters flying in all the time but they're boring white ones. Nothing like the flashy orange one you have in your post, Carmi.

what a lovely orange and the contrasts with blue skies are beautiful....

Excellent pictures. Very hard to get some of those angels in the environment ORNGE works in.

Single point of information, unless it was an incubator being placed in the choppers (and therefore the NICU team) what you saw were not flight nurses, but Advanced Care Flight Paramedics and/or Critical Care Flight Paramedics with three and five years formal education respectively. Only the Neonatal Intensive Care Transport Team are made up by specially trained RN's.

Those are some great shots of our aircraft, always see people taking them as we lift off from scenes or hospitals but rarely get to see them myself!