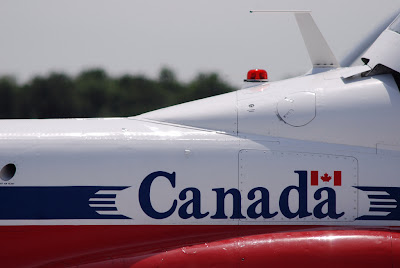 Canada lost another six soldiers in Afghanistan yesterday, their lives ended when a roadside bomb obliterated their armored vehicle in the Panjwaii district, just outside the city of Kandahar.

When we were at the air show barely two weeks ago, we were privileged to meet so many members of Canada's military - any of whom could just as easily become victims if and when they are sent to this precarious region.

There's been a spirited debate over whether public service vehicles in Canadian cities should be carrying magnetic yellow ribbons to express support for the troops. The small-minded among us have been flooding editorial pages and radio talk shows, trying to convince anyone who will listen that they oppose war and they won't support a ribbon campaign.

I'll be perfectly blunt when I conclude they're all morons. You can oppose our involvement in an armed conflict - Canada in Afghanistan, or the U.S. in Iraq - but still express support for the men and women who are fighting and dying there.

I pray for those lost souls tonight, and for those among us who can't appreciate what these brave individuals and their families have lost on behalf of the rest of us.

Regardless of opinion or political belief, the support of troops and their families is not just a patriotic thing....it is a human thing! My brother-in-law is headed to Iraq with the Marines (he's a career Marine) and I can't tell you how much the love and support of people help them get through daily life. Knowing that my sister-in-law may go at least 6 months without seeing her husband and my niece and nephew will be longing for thier father is heartbreaking. My mother-in-law waiting to hear of any news from her son and he will be so far away. As a mom, itis unbearable to consider. And in the back of my mind, I am painfully aware the rate of deaths over there on a daily basis.

Thanks for the post and I sorry to hear about those lives lost yesterday from Canada....

You hit the nail on the head. Regardless whether or not you agree with troops being involved with any military action or not they still deserve support. I'm not sure on my stance on the issues but I do believe in supporting the people who are putting their lives on the line. One issue I do have with the Canadian Military is that these people did choose to join, I do respect them but they were not forced into service.

The only thoughts that ever come to my mind when I read it in the newspaper, see it on tv, hear it as I'm walking by people each and every day is. " I wonder if there will ever be a day that when I pick up that newspaper or turn on the TV that I won't see anything about Iraq, Afghanistan, or any other country including our own at war" Just imagine ONE DAY... just ONE day. How nice a day that would be.

Prayers for them... appreciating them when we see them... thanking them... it is the least we can do.

Carmi- I just blogged about this this morning.

My definition of support must be much different than the definition of support by these people. Supporting my husband means supporting him in what he does and what he believes in. It does not mean disrespecting the men and women who volunteered to defend our country and our rights. If it weren't for them, I wouldn't have the right to protest in the first place. I'm certainly not putting myself in a position where it could be construed as anything other than 100% support for our troops and their families. I have blogged about this one before when I saw the Harley Davidson patriot guard. What they do is so much more worthy than any protestor standing on the road leading onto post (the military installation hubby is assigned to.

I agree with you totally. Even those opposed to a political decision can support those who fight for their country. I have personal links to the military and it saddens me that people can be so small minded.

On a related note don't forget that us Brits are in both Afghanistan and Iraq and have lost many troops too. We are also curently on heightened alert due to recent terrorist activity on home ground.

I don't care how anyone feels about the war... if one doesn't support the troops, they shouldn't live in the country being represented by them.

I have a yellow ribbon and a flag on my car.

I couldn't agree more with your 'moron' comment. Good grief. Voluntarily going or not our soldiers are dying and in the T home we support these brave men and women. I had to pull over to the side of the road when I heard the news on the radio yesterday. I just happened to be driving by our military base here in Edmonton and it all hit home. My thoughts and prayers are with the family of our fallen.

Here is something I have often wondered...
Exactly who gets the money from the sale of those ribbons anyway? Is it donated to the families of lost soldiers? Is it used to purchase items for care packages to send to soldiers? Or is some one using our sense of patriotic caring for our soldiers to line their own pockets. Please don't misunderstand me I stand behind them 100%. Each one lost is a tragedy to us all.

You are right. You can not support the war but still support the troops. We want them all to come home safely (and soon) Wearing a yellow ribbon does not mean you support the war, it means your thoughts and prayers are with the soldiers who put themselves into harms way.
I'm sorry for those soldiers who died. I pray their families will be alright in this difficult time. And I pray that all the soldiers will be coming home soon and we can end this awful war

Coming from an ancestry that's full of violence (Cossacks, Holocaust, barns filled with Jews and set on fire...), I can't condone the killing of other people. It just doesn't solve anything.

That said, though, I have nothing but admiration for the men and women who choose to enter the armed services (including my favorite babysitter).

So yes, I support the troops. Just not the botched job that's taking so many of them away from us.

Carmi,
I agree with you, man. Those are brave men and women out there giving their lives for our great countries. They deserve our thoughts and prayers.

Carmi- Hi, thanks for posting this. I agree 100%. And I feel like the person who commented above me, we wouldn't have the oppertunity to express our views but for the men & women who have fought and died for our freedom.

Supporting the troops is not about politics. There are CHILDREN who have decided to go there and fight. My gorgeous and talented cousin, Cammie, left at 18- 18!!- to fight. There are mothers, fathers, brothers, sisters, sons and daughters. We cannot forget that. Ever.

Doesn't seem right does it? Injustice. Worng. There is a new ad hitting Australian televisons saying that why are we (aussies) still in Iraq? Aren't we meant to feel safe in our ordinary lives and didn't we go to Iraq to help resolve peace. It has never happened. There are so many views to this arguement and people become so heated on the subject. Troops are just doing their jobs, like you go and do yours and I do mine. There are too many morons in the world to be ringing up radio stations and whingeing. Leave that to the people who loose their loved ones to fight in some war. End of rant.

I agree with you,even though i live in the US. Its the exact same here though more people are starting to see that we need to support these troops even though we may be against the war. Its not the matter of what side we may be on, these people are still our people and they need support(even the dead ones).

I pray for them too. After reading your post yesterday, I wrote a few posts myself on the loss of our soldiers, trying to convey the feeling of living in an area where the armed forces play a key role in the lives of my community.

Supporting the troops - and not necessarily the fight - comes so easy to me. I'm the child of many generations of service men/women and married into the Canadian Forces well over a decade ago.

On the battle in Afghanistan, I just don't know if I can separate the support for the mission or the troops. I'll blame it on my gender and the deep belief that all women, regardless of where they were born, deserve equality, safety, security, medical care and an education. Sure, we often hear about the fighting on the news, but our soldiers are also working very hard to improve the lives of many while they're there (building infrastructure, schools, teaching skills, etc.). What they do there is so much more than fight and I wish these things would be given equal billing in the newspapers back home.

Each time I hear of the deaths of more soldiers, I thank the gods that mine has been spared. Then I go to sleep knowing he'd give his life for a stranger because he believes in the cause. Who am I to deny him that?

One of those soldiers (Cpl. Cole Bartsch) was a friend of my SIL, so this has stirred things up quite a bit the last few weeks. Tess wrote a blistering post on her blog about this issue afterwards.