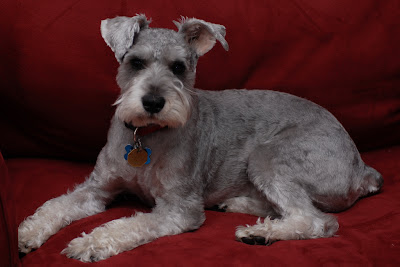 Sitting pretty for the camera
London, ON, July 2007 [Click to make the puppy into an adult]

Our dog, Frasier, celebrated his first birthday on Sunday. He can't read, of course. Nor can he understand the concept of calendars, orbital mechanics or Hallmark cards. So as far as he was concerned, today was yet another day in his charmed dog's life. But to our kids, today was special.

Noah spent much of the day drawing cards in various shapes - dog bone, party hat, dog head, etc. - and taping them up throughout the living room. He placed them wherever the dog was likely to see them, but too high for him to actually get to. See, our beloved dog is quite the paper-chewer.

Dahlia sang him the happy birthday song as soon as he woke up this morning. She sang it a few times, with different tempos, and at increasing volume. He didn't seem to mind.

Zach ensured he had extra food in his bowl this morning - notable because the smell of Frasier's food usually makes Zach nauseous - and also made sure my wife scheduled time to go to the pet store to pick up a gift for him.

I know. Birthday gifts for a dog. Ridiculous.

Yet I can't help but think that this was an entirely appropriate way to mark a milestone in this furry being's life. In a year when he went from the well-documented birth of a purebred to a family that clearly couldn't or wouldn't care for him, and left him in a cage for upwards of 18 hours a day before we adopted him, it mattered that on his birthday he had a happy day surrounded by people who adore him. It mattered that our kids got to bring a neglected pet into their home, that they learned how to love something more than any tchatchke they could get at a store. It mattered that this little one's life got happier as the year progressed, as did ours.

For him, today wasn't any different than any day in his life these days: He plays, he gives kisses, he gets hugged a lot, he sleeps, often on us, and he chews up the occasional newspaper and shoe. But for our kids, today allowed them to formalize what they've learned about pet ownership since we welcomed him into our home almost four months ago. As a parent, it was a joy to watch.

My 6 year old has a fondness for picking up our puppies and dragging them around. They look at me with this look that says, "This is so undignified." But they always lick his face and prance around trying to get his attention anyway.

I agree that it is worth celebrating that children can learn to love and care for another living being with kindness and enthusiasm.

And our dogs are like our children. They get Christmas gifts and my husband was guilty a while back of buying them matching pink jackets and berets.

I think it's lovely you had such a special day for your dog.

I think as long as there is a fun loving atmosphere dogs will have a ball...and humans too...

I have been known to attend a party held in honour of a doggy birthday complete with a doggy liver cake not for human consumption... though I did wonder what had happened to the sanity of those inviting me - and of me for going... but any reason to celebrate and let our hair down and have fun...

no doubt dogs give out a lot of love and are every bit a part of the family.

Happy Birthday to Fraiser!
And what great lessons your children are learning.
He sure is handsome. And I wish all dogs a long and very loving and fun-filled life.
(We always celebrate canine and feline birthdays in this house. They're very special)

What a beautiful dog. He looks so happy and the kids were so sweet in celebrating his birthday. He is a family member and that's a great way for them to look at it.

We usually celebrate doggy birthdays by giving them a cheeseburger. Hey, it's only once a year.

Happy Birthday Frasier! My how cute is he?!!

We celebrate our dogs b-days too w/treats, new collars/leashes if needed. Sometimes an outing in the car where we can walk along a river somewhere. If available, we stop for ice cream. It's a party all around, lol!

What do I wish for a dog? A "forever home," plenty to eat, and a big field full of rabbits to chase (and, for the rabbits, the ability never to be caught)

My wish? That HE enjoy the unconditional love that he gives to the people in his life.

So sweet Carmi! I think if I were giving Frasier birthday wishes, I would wish him all the tummy rubs he wants, a neverending game of throwing the ball, and an endless bowl of doggie treats! :)

a wish for a bone under every pillow, a soft place to sleep every night, and a child to love every day.

what a lovely post this is! Happy Birthday to you furry fella! :o) Your kids sound like the really enjoyed the day which is cool :o)

Happiness would be my wish! I rescued a black labrador about 8 years ago, he had been treated badly by the previous owners and was a bit of a handful to start with but in time he just seemed to change into this happy go lucky little guy, full of fun and love...ok he was only a dog...but I knew he was happy!

Have a good week Carmi :o)

Since most adults complain of not having enough time, I think a dog (or cat) appreciates being the center of our attention, even if it's just for a few minutes. In fact, I think I'll go wake up the cat, sleeping peacefully on the futon, and give her a big ol' hug that will squeeze the poo out of her. Love! Love! Love!

It's Pandora's 18th birthday this month (about 85 in cat years). I think the nearest we got to celebrating the cats' birthdays were the blogparties on their blog.

I agree wth you, it's not all about the dog, it's about the children too. I love that they all worked so hard on Frasier's Big Day.

What would I get a dog for HIS birthday? A little girl dog :-)

A very Happy Birthday to Fraiser!

My birthday wish for him is that he always has your wonderful family to love and be loved by.

We celebrated each dog's birthday - they got a steak (cheap one - but a steak anyway) grilled just for them for their dinner. (Of course, they shared a few bites with the other dogs)

First off Carmi, I think it is entirely appropriate to give a dog or a cat a Birthday Gift! After all, he is a member of the family!
I think it is so wonderful that your kids have the joy of loving a pet and being loved unconditionally by this pet...A GREAT learning lesson in the ability to open one's heart even further...Happy Birthday to the dear four footed addition to your WONDERFUL Household. He must be soooo very happy that you all saved him from that torturous life he was forced into...Horrid, to say the least.

I would get him a Big Special Dog Bone that he will be able to chew on for a very long time! Not particularly creative, but something I bet he would just love!

What I wish for a dog on his birthday is many neat and interesting places to stick his wet, cold nose... yummies for his tummy... lots of faces to plant wet kisses... and a never-ending supply of hugs from his family.

Scritches behind the ear and on the tummy for the birthday puppy!

I grew up with a cocker spaniel for 10 years as a young person. That dog thought he was human. He was human to all of us. At Christmas we used to hang stockings up and even the dog had one - at nose height - and he knew what it was and what could possibly be in that stocking. It was incredible, his sense of humanity as a dog.

When I lived on South Beach, there is a shop dedicated to the spoiling of any pooch or feline. The Dog Bar was very popular for resident walkers and owners.

What a lucky dog! I'm so glad he found your family to care for.

The very best thing an animal can get for his birthday is something Frazier already has:

a family to love and care for him. Allow him to love you, Carmi. That's what he needs.

Nothing rediculous about bday toys for our dogs lol..or other pets...we just love them as part of our families anyway lol. I don't do the bdays but xmas time they get a gift..I do however bring home new toys or treats every once in awhile when out shopping..they get so excited when I show them a new toy or t-shirts...yes I said t-shirts!!! I just thought that a great gift would be a t-shirt made for a dog that says (IT'S MY BIRTHDAY SO I'LL BARK IF I WANT TOO!)....haha...I think I am on to something...brb..gotta go to the the store lol....
BTW..Carmi..sorry to hear about your motherinlaw in hospital...I read your wifes blog ..hope she is holding up well over here in Montreal with her mom. My thoughts are with u and your family.

happy birthday, fraiser! may you have many happy dreams of chasing rabbits.

i had a birthday party for Moo when he turned 1 year old on April 18th. i also bring him presents when i travel or go shopping. he is like my child.