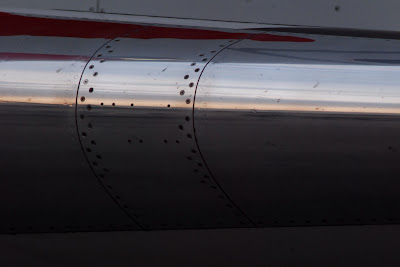 Home at last
London, Ontario, May 2007 [Click to enlarge]

The final leg of my trip home from China was a short hop from Toronto to London. The regularly-scheduled Dash-8 turboprop/puddlejumper had been pulled out of service after it arrived in Toronto. I'm not sure why, and I'm not sure I really want to know. But after a bit of a delay while the airline searched through the bottom of its proverbial knapsack for a replacement plane, we boarded one of my favorite aircraft, a Bombardier CRJ (Canadair Regional Jet).

It's manufactured in Dorval, Quebec, right near my old home. The old Canadair plant in the nearby suburb of St. Laurent - where I went to high school and used to watch them test-fly the then-new aircraft when I really should have been studying algebra - still builds major assemblies for this plane, as well as the Challenger business jet on which it is based.

So I've got a longstanding like affair with this particular aircraft family, and I relish any opportunity to get on board and head into the skies. I know, more detail about my aviation addiction than you really want to know.

As I deplaned in London, I turned back and admired the leading edge of the wing. Like the plane that just a week earlier had safely started me on my journey, this one ensured I was able to return to my family, now waiting just inside the terminal.

Your turn: I find air crashes to be unimaginably tragic. The TAM Airlines disaster in Brazil this week got me thinking about those souls unlucky enough to not make it back to their families after being away. Life is full of razor-thin differences between routine completion and horrifically immediate endings, and I strangely relate to the immense sense of loss when something like this happens. What do you think when you witness news like this?
Posted by carmilevy at 7/19/2007 11:05:00 PM

How blessed I am to be alive.

I think, "I'm never flying again."
I think, "If not for the carelessness and corruption of the powers that be, these people would still be alive."
I think, "I hope they weren't in any pain. I hope it happened quickly."

I love the lines of this photo --- it really jumps out at the eye.

On crashes: I grew up just outside of Heathrow airport in London, and recall vividly a crash killing scores of people, which happened a few miles from our house. And I recall the newscaster saying "traffic is backed up for miles around", looking out the window and not seeing a car.
Twenty minutes later, traffic was backed up for miles around. All sightseers, wanting to come and gawp at the horror...

I grew up in an airline family, so this sort of thing affects me very powerfully. Since I was a little girl, aviation disasters have been an unhappy fixture in my subconscious (and frequently are featured in my nightmares, when I'm unlucky enough to have them). It's terrifyingly random.

I think, "Thank God it doesn't happen more often." Although like terrorist attacks, airplane crashes strike an emotional chord, I am still far less likely to die in an airplane crash (or a terrorists attack) than a host of other everyday things - like driving. I guess it's the sensational nature of the events - I try to remain realistic lest I let it paralyze me.

Going on tv today? What are you doing there?

When I was a kid I lived in Huntington, WV. The Marshall University plane crash devastated our town, my neighbor lost her husband on that flight. I didn't learn this until a few years ago, but that lady called my mom late at night threatening suicide.

'There but for the grace of God' (insert deity or deities of choice) - it's just too big to imagine....amd that's when I'm glad I don't have children.

I wanna see you on the telly!! [sulks]

I know nothing much about aircrafts. My second brother was kind of crazy about painting all kinds of aircraft and that put me off it completely, I think. Lame excuse as any, I know.

I never got around writing about that aircraft which you posted last week, I think.

Thanks for your comments to my posts. I am truly glad that you are getting to read almost all my posts..:D

No, I never given any thoughts for publishing.

An aside: I am glad that I found your blog via michele. Linked it to my blog too.

I have a lot of trouble with tragic news like that and often have to shut it out for a few days. I can better deal with the human suffering if it's several days old. I don't know why...

I see that your wife didn't kill you for posting that photo :)

When I hear tragic news like that the tragedy of it hits home immediately. You about summed it up for me. I think of the people waiting for their loved ones to return.

Michele sent me to say that I hope your family is safely back together again.

Carmi: interesting that you are a technology guru: I spent a few months in Halifax this year being amazed by some little bits of Canadian technology (specifically smart boards, plus also the way that the Canadian academic community has adopted distance technologies into some of their practices).

Michele sent me, but I'd have been happy to visit anyway!
N.

As a firm believe in God, Christ and a life there after. I contemplate where those whose time had come were in their lives and where they find themselves next.

I don't cry, or weep for those I did not know and I am depressed. However I do sympathies with the families that are left to cope with loss and for a while after a major incident, if I hear of it again, I ponder how they are making sense of their grief.