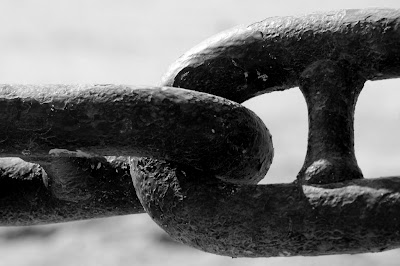 Please name/caption this photo [See below for details]
Grand Bend, ON, July 2007 [Click to enlarge]

The parking lot that fronts onto the beach of this lakeside resort town is surrounded by a simple, low fence of thick chain strung from post to post. It's the kind of installation that seems to fade into the background. Well, for most people.

I liked the texture of it in the bright late afternoon sun. I liked the message of strength in the scene. But enough of what I like. What matters is the caption that you're going to give it (you are going to play Caption This, aren't you?)

The rules, such as they are, can be found here.

Your turn: Name this picture. Win pseudo-valuable prizes! Become a Caption This legend. Enter as many times as you want. Bonus points if you refer your relatives.

Sara for this lovely play on words: Where did you say the starting blogs should go? Please take a moment to visit her excellent blog, Garnet's Adventures, to congratulate her.

Other notable submissions include:
You all made me smile and think this week. Thank you so much. I'm sure you'll all somehow manage to raise the bar with this new entry.
Posted by carmilevy at 7/29/2007 12:33:00 AM

Email ThisBlogThis!Share to TwitterShare to FacebookShare to Pinterest
Labels: Caption This, Macrophoto, Monochrome

They had a bond that could not be broken. . .

I am not good at captions, but I am good at visiting from Michele.

"A chain is only as strong as it's weakest link."--James Brendan, band director, 1955

"Blessed be the ties that bind."

When I said I wanted more links, this is not what I meant.

Hi Carmi. Michele sent you to see me so I thought I would pop over to say hi while you visit me!

I eally like this picture. How about "Holding On" more of a tilte than a caption really!

"You ARE the weakest link...goodbye!"

Caption: "can I get a link on your blogroll please?"

Michele sent me to suggest this....
N.

"Everyone is a link in the chain!"

How's that for profound?

As I got a loser look I finally realized they was linked. Serious!

I'm not good with captions, either, sorry

As I got a closer look I finally realized they was linked. Serious!

I wonder if I can zoom-in closer!

1 The chains that bind.

2 Wow! This will make a great subject for my caption comp!

It's late and my brain is tired. Thanks for dropping by and Michele says hi! Have a great week!

Good to see you again...I'm here from Michele's...

Oh, dear...you know me - a writer that can's caption or write headlines...

"To communicate through silence is a link between the thoughts of man." -- Marcel Marceau.

No, I'm not playing (not my words, and all), but that's what came to mind.

Mainly because when I first saw this I thought the right link was a woman leaning over (yes terrible that she had no clothes on either).

And it kinda is like a representation of my kinda marriage. :)

Hey Carmi, sorry I've been such a stranger. Life has been CRAZY busy these days. (That's a good thing!) Hope you've been well. Missed you. Looking forward to catching up with you.

lefty, says to righty, "I hope your not the weakest link"

"Together we are one."

Nobody sent me. I'm here of my own free will :)

We were made for each other, and nothing will tear us apart except bolt cutters.

This is a different type of photo for your photo caption contest. I do not have a good caption (I like yellojkt's)... but I had to make mention that this is a wonderful photo.