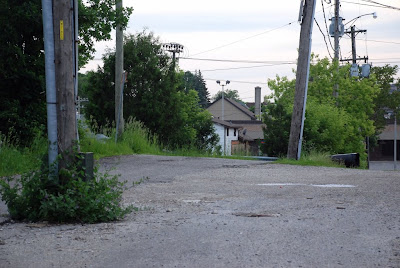 Another red light photo from my recent adventure through the wilds on southwestern Ontario. I took this one precisely because I don't think anyone else might have ever taken a similar picture of this place.

I guess I just want to be different.

I wish I took more pictures in the past of ordinary street scenes because they change so fast and no one seems to be documenting them much. I wish I had my brothers old baseball cards too. They'd be worth a lot today.

I like to talk to children that other people seem to be ignoring... I am my own person when it comes to parenting (i.e. no hyper-scheduling the kids or super-mega birthday parties so common in this suburban area)... I try to make the ones helping me at the checkout counter at the store smile when it looks as if their day is humdrum... I am a staight-shooter (you will know what I am thinking)...

my work takes me down similar streets often......there is sadness on the surface, and sometimes in behind the facade, but what i have found when I have had to take what I call the road to "nowhere" is that there is a beatiful human being waiting to be recognized.....waiting to tell their story.

lol. I'm pretty sure you just called me a "no one". Back lanes, vacant lots, and random side street are some of my favourite photographic subjects.

I definitely follow your logic, and this is probably why I easily connect with much of your photography and writing.

Anyway, I'm different because I'm Canadian Mark - The soft spoken bagpipist with no Scottish heritage, who sells diamonds for a living and can quote all 6 Star Wars movies (using funny voices where applicable), all while incessantly searching for the Canadian Dream in Action.

I don't know anybody else who does all those things.