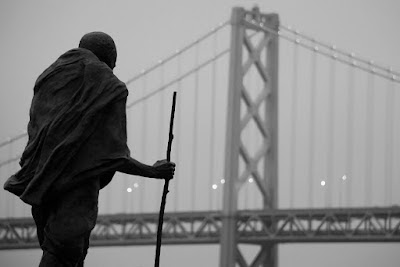 Please caption this image
[Click here for instructions on how Caption This works]
San Francisco, CA, July 2008 [Click to embiggen]

If you're just joining us, this photo continues this week's Thematic Photographic theme, monochrome. Click here to get in on the insanity.

The scene: San Francisco waterfront, on the Embarcadero, 6:31 on a dismally gray and damp morning. I probably should have been back at the hotel, packing and getting ready to go to the airport. Instead, I got it into my head that I should take a rapid walk out to the Ferry Building in the shadow of the Oakland-San Francisco Bay Bridge. I wanted to bring some pictures home from this very brief trip, and a morning photo-blast through the downtown seemed like a fun way to cram a lot of optical bits into a teeny slice of time.

So emotion trumped logic out as I jumped out of bed, grabbed my camera and tore out of the hotel. The weather was so gray that many of my pictures - especially the ones of the bridge - came out monochrome despite the fact that I was shooting in color. I was stunned at how many homeless people were here, and had to take great care to avoid getting too close or otherwise upsetting them with my lens. In retrospect, probably not the smartest place for me to be, far from home and alone. But you can't tell new stories unless you push your envelope a bit every once in a while.

I shot this image from the parking lot behind the Ferry Building. The shepherd-like statue seemed to be watching over the countless cars and trucks making their way over the huge structure. I tried to will the statue to cast its protective gaze over the poor, forgotten souls sleeping, hidden, under blankets near its base. No dice.

Your turn: Please give this photo a caption (or many captions.) Click on the comment link below and go to town. I'll post the winner next Sunday.

About last week's image of a gull in flight: Definitely a keeper, this image was. You obviously agreed, as you filled the site up with zillions of great captions. Here's a quick rundown of some of the honorable menschens:
In the end, I had to declare a tie in what evolved into a delightfully fun superpower arms race of Caption This. Steve (aka SPwriter) and Robin went at it all week and ended up making this a totally cool, majorly entertaining process. Steve's "Never a gull moment" and Robin's "Tastes like chicken" take the title this week. Please visit them both. Their words and images will captivate you.

Shameless plug time: I'm a sucker for repeat players. Keep tossing captions at the wall until something sticks, I always say. It's more fun that way, too!
Posted by carmilevy at 7/27/2008 02:46:00 PM

Email ThisBlogThis!Share to TwitterShare to FacebookShare to Pinterest
Labels: Caption This, Monochrome, My travels

Hello Carmi,
Cool photograph. It seems somewhat ethereal to me for some reason.
Thanks for the mention from last week's "Cation This."
Here are some captions for this week's, to start off with:

"Bridge over troubled waters."
"Thy rod and Thy staff comfort me."
"Bridge the gap."
"Beam me up, Scottie."

I may be back with more later

Hi Carmi,
"Ghandi headin' off to Frisco to hang with The Grateful Dead."
Bradley

Thanks, Carmi, for the shared caption kudos. It was definitely a fun "Caption This" event.

And congrats to you, Robin. Always a pleasure doing "battle" with you.

This week? I don't think I'll be quite so prolific. How about a more manageable number to start with. Say...five? Here they are.

A giant despite his sighs.

Rapt in a fog.

Suspension of his belief.

Not quite ready to cross over.

But, how do you get ON the darned thing?

spwriter is fun to duel; what an honor to share the honors!

I'm wiped from a VERY long (but good) day...I'll be back with something, surely.

I do know this much--this picture is fabulous!

I don't have a caption suggestion (I kind of like lynda's, though), but I did want to comment on the photograph. It kept demanding my attention and I couldn't figure out why for the longest time. I think it's something about the juxtaposition of the man from an era gone by against the feat of modern engineering that the bridge represents. Awesome photo, Carmi.

"Bridge over the river, why?"

"Crossing over will surely take a toll."

I'm sorry they all seem so dark, but there is such a sadness in this picture.

Hello, Carmi!
What do you get when you cross a river and a stream?
Wet feet.
Sorry, but I could not resist.

A few other captions came to my mind:

"Welcome to the other side."

Did you have your laundry date? We have those dates too, just at home. Pop in a movie while folding endless piles pausing the movie only to switch the loads and add more to already massive heap!

BTW, your work is awesome!

Hi Carmi, It's been awhile. First I was busy and then I was sick but I'm on the mend now.

I like the photo - well done for persevering under such trying conditions! My effort at a caption is:

"You mean I gotta pole vault over that!"

Hello Carmi,
One more caption came to my mind:

"Watching the world wake up from history."

Okay... again I really don't have a caption, but I thought of a Jonny Lang song ("Wander This World")when I saw this photo and here is part I want to share:

Here are two of my caption ideas- one is silly and one is more serious:

"My peace I leave you"

"God, this is trickier than parting the Red Sea"

thanks Carmi for challenging our minds with your blog!! I added one more pic for thematic and you can find it here:
http://swile67.blogspot.com/2008/07/summertime-frolicking-thematic.html

"There will always be a Gandhi where Gandhi ought to be."

Seriously, I'd love to come up with something amusing here, but I got nothin'. The shot just inspires way too much reverence in me for levity.

"damn that troll and his three questions."

Land of the free. Home of the brave.

@Writerjax: Not if you're a billy goat. *wink*

So, Morty, get this. I'm just standin' there looking at the beautiful color of the Golden Gate bridge, the sky, and stuff, like I been doin' for what, fifty years, when some artsy type comes up and snaps my photo -- not so much as a "Good Morning" even. Then, all of a sudden, poof!, everything's black and white. It's like I'm back on Ed Sullivan or somethin'. And not a cop in sight.

(R. Sherman, however, likes the photo.)

The Old Man and the Sea

who watches the watcher...

Carmi This may be my favorite photo of yours.