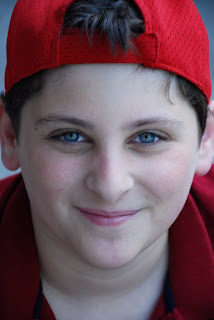 Our son, Zach, went to bed last night one age and woke up this morning another. It's been 14 years since he fought his way into the world and instantly turned us into parents. As I write this, I'm shaking my head at the sound of the number, 14. Has it been that long? The calendar says it has, but is certainly doesn't feel like it.

He's had a very tough week. A tenacious case of bronchitis has kept him home from school. He's still feverish, nauseous, exhausted and generally irritable, which is prompting a lower-key strategy to marking the day. Lunch with his grandparents is on hold for a bit, and although he'll certainly blow the candles out on his cake later, I doubt he'll be eating much of it. The cold rain outside probably isn't helping, either.

But this will pass, and when it does he'll still be a newly-minted 14-year-old figuring out his way through the world. He started high school last month, and has been beautifully settling into his very large new world. He's enjoying his classes and his teachers, and is bringing home marks that would make any parent proud. And we are, because all parents really want is for their children to be passionate and successful in whatever they choose. So far, Zach's doing an excellent job of that.

He's been quiet on the nag-my-younger-sister-and-brother front, but we know that'll pass as well once he feels better. Something tells me his younger sibs look forward to that moment, as well. Even the dog wants his big human brother healthy again: no one tosses a chew toy quite like Zach does.

May every milestone from now on be a happy one, Zach, as you continue to grow into the man you're destined to be. May we always be able to celebrate days like this as a family, and may you always be surrounded by the people who care, who matter, and who love you unconditionally.

Happy Birthday Zach....and hope you get your zip back again soon.

14 years? hmmmmm.......it's is the beginning of firsts....high school being the springboard. What i remember is that my awareness of global issues increased along with my awareness of the importance of friends. There is a strong opening of interests to understand bigger issues as well as moral and value issues. It's a great time of life because one's journey spiritually, emotionally and vocationally takes a big step forward.

Enjoy it all Zach.....ask many questions and challenge many answers....well, except your parents because of course they know best! :)

Have a wonderful birthday, Zach! Carmi, he is a miniature copy of you, isn't he? So cute. Our older grandson turned 14 in March. I cannot believe he has been in our family that long - so I know what you mean about Zach.

Happy birthday Zach. I hope you're feeling better soon too!

There is no denying he is yours! What a great tribute from his dad. Happy Birthday Zach!

He's a month older than my son. Hope he feels better. My son would not be happy at all if I did a blog post about him. So to me being 14 means being independent from mommy.

Time flies, doesn't it? My post this morning focused on some light-hearted ickiness as parents....tomorrow's is the good stuff.

this is a such beautiful blessing to Zach from an obviously proud and loving parent. =D

Awwwwwwwwwwww! Happy Birthday Zach! I hope you feel better real soon! You look like your papa! I am sure you mama is mixed in there somewhere but I haven't seen a pic of her. Tell your dad he should put a family pic up:):):):):)Your daddy sure is proud of you!

Congrats to Zach! I look in those eyes and see the glow I watch in my thirteen year old's face.

And congrats to you and the Mrs. for a fine job as parents.

It's hard to believe that little guy that made us parents in now 14. I also shared my thoughts about this momentous occasion on my blog.

It has really been a rough week for him. I think he's on the up swing.

I love his little grin. It reminds me of you!

HAPPY BIRTHDAY ZACH! I hope you get to feeling better ASAP...

Man, when mine turned 14, we were in North Dakota, and that meant learning to drive...because for whatever reason, that's the driving age. Fourteen! That age is pretty much engraved in my brain as the Year of Screaming Terror ;)

Happy Birthday Zach!By the way Zachery was my favorite name for a boy.Ah but I had 2 girls LOL.Lets see when I was 14 hm..I think that was my first crush, attraction,whatever you called it.LOL Oh and the cheerleading years began, football games and lots of Pj parties.Its all girl stuff Carmi,;)get well soon Zach!The girls are probably waiting :)

Happy birthday, Levy family! Because a birthday doesn't just belong to the person having it, but to the parents (and children) as well.

Happy birthday, Zach. As others have said, you are indeed your father's son. I hope this year will be a wonderful one for you.

Adding my best wishes to you, Zach, for a happy 14th birthday! You are blessed with family (and friends, I'm sure) who adore you and provide exceptional models for your journey through all phases of your life. You're a lucky guy - but I'm pretty sure you know that.

Carmi, we just went through that with #15...Josh is at the age which was, for me, a bad one, and he's doing it beautifully. I, too, wonder where the time went - doesn't seem like too long ago since he was a munchkin, and now a decade and a half has gone by and he's growing fast. So I can relate to the head-scratching at #14..!

Thing is...look at where we were 14 years ago. Computers were popular but nowhere near as popular (or prevalent) as today. Cell phones existed and many were already dependent but not to the point that our kids are, today. We are witnessing the age of - as coined by Mark Prensky - Digital Natives. Kids (ours) born into a digital age that didn't exist when we were growing up. We are the Digital Immigrants and I know this is old news to you. But it's also a way of measuring how much time has gone by. I remember the first program we got for Josh: Howie Mandel's "Tuneland". For Windows 3.5!!

So while it goes by in the blink of an eye, it's really been quite an evolution, the past 14 or 15 years...

BTW - the picture of Mr. Birthday Guy (not Boy, ya notice) is stunning. He is a perfect mix between you and Debbie, which just goes to show that 2 positives DO produce a positive!! (and math was never my strong suit but even I can see that!)

And, I know how he feels - every birthday of my childhood was spent with a cold or flu. One of the 'joys' of being born in October. :P

Hope you feel better soon, Zach and wish you a very happy (though belated) birthday!!!!

Hope I am not too late to wish Zach a happy birthday! That’s rather craptastic that you are sick on such a happy occasion. I hope you are better soon. At 14 I was newly at my high school meeting up with a wide variety of folks that I had not been exposed to before. It sounds like your head is on a bit straighter than mine with the parental glowing going on.

Enjoy what the year brings and best of luck in the future.
Most importantly, keep in mind that even if you make a mistake or two your parents really do have your back. If you ever go through a phase where you think there love isn’t cool. They will forgive you. Hell, my parents had a lot to forgive; they still love me and are the folks I turn to when I need help/advice. Happy Birthday!!!

Happy belated b-day to Zach. Sorry it wasn't so terrific. I know that being the oldest can be hard as you're blazing the trail for your siblings and really your parents are just practicing on you hoping to get it right for the rest. ;-)

Still it fun being the oldest because you'll be the first to do many things and there is liberty and power in that.

Enjoy fourteen! and many happy blessed returns of the day. Hope you're feeling better very soon.

Happy (belated) birthday to Zach! I have struggled with chronic bronchitis much of my life, and it is never fun. I hope he's feeling much better already!