The computer people are talking to me 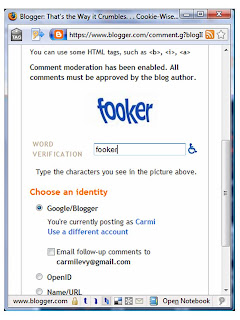 A captcha is a computer-generated sequence of letters and/or numbers designed to ensure that an actual human being has just filled out a form on the Web. It's designed to prevent mass-scale robotic scripts - often used by spammers, scammers and other online malcontents and criminals - from overwhelming a site with junk. Many bloggers use them to control comment spam.

The sequences are supposedly randomly generated. But just as 1,000 monkeys typing continuously in a room will 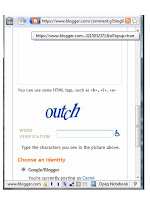 eventually put something coherent together (it may take a billion years and many generations of walls covered with simian-tossed fecal matter, but it'll happen), captchas occasionally resemble words that may or may not exist in reality.

So when this one, fooker, popped up on my screen, I was left wondering if it was intended as some sort of message to me, a silicon-infused warning that I'd better stop fooking with the world. Then, barely 10 minutes later, along came another one, outch. Weird, yes, but worthwhile noting as yet another milestone along the erratic journey through the jungles of modern Internet-borne life.

Your turn: What's a "fooker"? What does it have to do with "outch"? Should I worry?

About these images: They're funny. Or at least I think they are. And funny things make us happy, hence the connection to this week's TP theme. Don't know what the purgatory I'm talking about? Head over here for some answers.
Posted by carmilevy at 10/24/2008 09:18:00 PM

I actuall play online with a guy named Fookin... maybe they are cousins.

boy I needed a laugh and your post did the trick. A fooker is someone who likes to push buttons for the sake of laughs. No mal intent at all just fooking around!

well, first it was 'meet the captcha'

then the sequel came out called 'meet the fookers'

"Fooker" is what you say when you whack your shin on the coffee table and you start to say the...eh hem..."other" word and realize that your young kids are watching and listening to you.

"Outch" precedes "Fooker" in this scenario but you only say that because you have a mouth full of food when you whacked your shin on the coffee table.

A fooker is a really awesome captcha you got as karmic (or carmi-c) payback for posting photos of TWO wiggly pooches.

Hahah funny.They invented those I think to drive some of us crazy LOL, like me.Yes i think a fooker is something said when you bump your crazy bone LOL.great blog Carmi.~~becky

I don't know if you need to be worried, but I can tell you that I visited a blog right before this one and the word verification was "skingel" Is KY Jelly sending subliminal suggestions through word verification? :0P

A fooker is the old guy who lives next door to me and lets his dog bark all night...it can also pertain to the shopping cart with the bad wheel

Sometimes I really wonder just how random these things are. Maybe it's my dirty mind, but an awful lot of them closely resemble words Mama taught me not to say.

Funny...I've met one or two or them before.

Well if you know Austin Powers, You have the twins Fook me and Fook you. I guess we could call them relatives?

Sometimes I wonder how they come up with some of those combinations.

I get crazy ones all the time... I never thought to print and blog about them! How funny!!