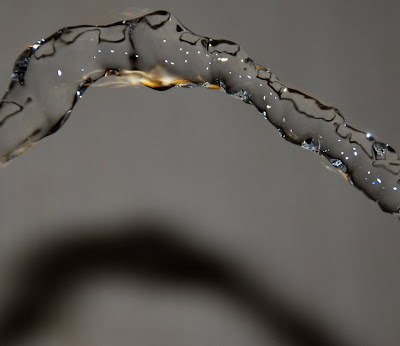 I'm generally not one for milestones, but I can't let the 100th Caption This entry go by without so much as a mention. It's been almost two years since a kind reader suggested I try a weekly caption feature. Since then, it's turned into a ritual of sorts for me, a chance to ponder just the right picture that will prompt just the right kind of reflection when someone drops in for a visit.

I've chosen this photo because it remains one of my favorites. We were attending a party in Montreal, a happy occasion that reconnected us with many members of our extended family. Our little man was thirsty, and decided he wanted to drink out of a water fountain. So off we went in search of one.

As he wiped his munchkin-face dry, he decided he liked how the water "was round". So as I stood in the middle of the hallway and explained how gravity worked on the stream of water, he asked me to take a picture of it "so Mommy wouldn't miss out." Who can refuse a request like that?

Your turn: Please suggest a caption for this photo. You may suggest as many as you wish. I'll announce the winner next Sunday, as we get started on our second century. For more background, and a peek at how this all began, please click here.

One more thing: All week long, we're celebrating shadows as part of Thematic Photographic. So if you haven't shared yours, please head over here and have at it.

So who won last week's Caption This? I thought you'd never ask. Stefan Lombard wins with the elegantly simple "Promise." Stefan is an exquisitely gifted photographer. His deft touch with a lens has influenced my own style, and you owe it to yourself to see his work. Not just once, but often. Please drop by his site and see for yourself.
Thank you all for helping Caption This make it to this momentous milestone. Here's to the next 100, and the next, and...
Posted by carmilevy at 12/07/2008 06:14:00 PM

That is a super-cool pic, Carmi. It looks familiar, have you posted it before?

Amazing photo - I'm going to have to try that myself - I love it.

Here from Tanya, and glad I came - thank you.

The alien tentacle solidified before my eyes. Next thing I know I'm waking up and had the strangest "aching" feeling...

not a caption, but looks like the most amazing icicle to me :)

Congratulations on quite a milestone, Carmi...I wasn't with you in the beginning, but I've been a fan for quite a while now. Thanks for giving us reason to see beyond the obvious.

This photo, though I LOVE it and its simplicity, is TOUGH! Nothing comes easily and readily to mind; that probably means I'll be haunted by the image in days to come.

I love seeing water in flight! You captured it perfectly, Carmi!

"Caption This" is 100? Really? It doesn't look a day over ninety. But congratulations on triple digits.

A few captions for today's pic (a great pic, btw):

The fastest way to freeze water.

The Dance Of The Tapeworm

Congratulations on the milestone and thanks for the honourable menshun :)

Great shot. My caption is:

That's one of those stories that just gives me goosebumps. I'm glad you little guy suggested it, 'cause otherwise the rest of us might have missed out too. This is a fascinating shot. Not just the rounded edges, but the little pinpoint reflections in the stream. Amazing.

Does it really need one? Okay... "Fountain of Youth" fits the back story more than the actual image, but it's all I got.

Fire and Ice. Cuz it looks like it's lit. Beautiful photo. And your son was wise to ask you to capture it.

Congratulations Carmi....this is always one of my favourite bloggie activities and look forward to it every week.

captured glance of the waterdance

that is really incredible. It's almost hypnotic...

What an amazing capture! Such a cool photo, Carmi!

Congrats on 100 Caption This. I think it was a Caption This that brought me to your blog for the first time. That was a very good day indeed!

The stream of water is awesome! How about "Stream of Life"

Awesome shot, Carmi. Water can be so tricky and you did an exceptional job of capturing this. Love it! :D

Congrats on your 100th Caption This. :D

Moment of Plenty.
or
Abundance.
or
Tiny Waterfalls.
or
Just for you.
or
Sweetly Quenched.

Thanks, that was fun. Wonderful, 100 captions! yay!

I can certainly see why this image would be one of your favorites. Water is fascinating to photograph.