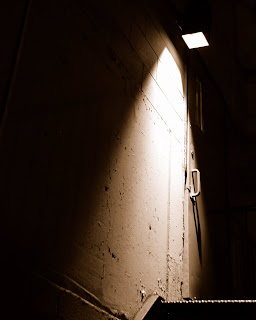 1970s-era architecture won't be remembered well by history. Shapeless concrete and brick buildings showed just how much their creators had learned about controlling costs for themselves and stunting imagination for pretty much everyone else.

Yet even the most seemingly forgettable buildings - or snippets of them - deserve a little bit of lens time. While everyone's busy taking the same old pictures - head shots with stilted, predictable smiles, the kind of stuff even your own mother finds boring, etc. - I'm wandering parking lots taking pictures of things that attract attention from security guards.

And on this cold, silent night, said security guard isn't happy to see a strange guy pointing his lens toward his building. Thankfully, he - pause while I find a way to say this charitably - seems to have spent more time befriending the staff at the local Dunkin Donuts than becoming one with the apparatus at the gym. So it isn't hard for me to disappear before he can wheeze his way over and bust me.

Once again, the shadows of the night (this week's Thematic Photographic theme, don'tcha know...here!) give me inspiration and protect me from baton-wielding rent-a-cops. Nice.

Your turn: Why don't security guard companies have better physical fitness standards for their staff?

Great shot and entry Carmi!
I'll say happy 100 now just in case I miss it - we have a huge school project to complete tomorrow - yuck! And then it's on to another busy blogless week ::sigh::

The contrast is quite striking. I enjoy your ability to shoot seemingly mundane scenes and make them so interesting.

BTW - do you want the links for TP on the first post, or on the current day's post? I'm never sure where to go.

On that note, here is today's entry.

Have you ever photographed Simon Fraser University?? It was a concept project, built in the 70s. The library was shaped like a coffin, as the architect believed books would soon be dead.

Lots of people have a problem with SFU's design...but I've always loved it.

I think that it is probably hard to find people to work the graveyard shifts on security detail - so theya take whomever they can get (fat or fit).

Thanks for stopping by my blog!

And in answer to your question, for some reason people don't seem to care so much about the security guard as they do about the price. Just the other day I passed an embassy that had one old guy standing in the cold as their security guard. No guard shack, nothing. They can afford this guy who stands and looks "menacing".

Won't be remembered well? I remember it very well, despite not being alive in the 70s, and I remember it particularly well when I cannot see the sea because of some darned ugly monstrosity!

Nice shot--the good thing about high interest rates in the 70s is that it discouaged too much 70 architect--otherwise the decade would be remembered like the 50s!

Love the story of the security guard. I like shots like this. The deep shadows lend an air of mystery.

My contribution for Shadow, can be found at my photo blog.

Thanks so much for visiting the Back Porch. I appreciate your visits and comments.

Hope your week is wonderful.

If you are the most threatening thing he has to deal with -- then he doesn't need to be able to run Ha!

I haven't figured out how to take night shots.

I love the air of mystery in this shot. It looks like it should be a film noire movie poster or something similar. And I totally get what you're saying about ordinary things making extraordinary photos. There's interest in them. What stories could this old car or house or broken down fence tell?

Just yesterday I was down in < sarcastic >lovely< /sarcastic > Jacksonville, NC for a dog trial a friend of mine was competing in. The trial was at a sod farm graciously lent (or perhaps rented, I don't really know) to the club for the purpose and since I had time to kill before the competition started I went over to what I could only call the "in house junkyard". When I got back my friend asked if I'd found any interesting things to take pictures of. My response was "Oh yeah! Rusty junk always makes interesting photos". She found that amusing, but I was completely serious.

Found a few shadows along the way too. One of which found its way to publication already.

And for those who may have missed it, I got another one as a by product of another project I was working on for a different friend. I was particularly pleased with the results of that one actually.
Thematic Photographic 27: "Shadow" v.4.0 - "Shadowy Corners"

This photo reminds me of old detective stories :) Great shot and the treatment of the pic really works too!

I have another entry up for TP before the theme changes over at my photo blog :)