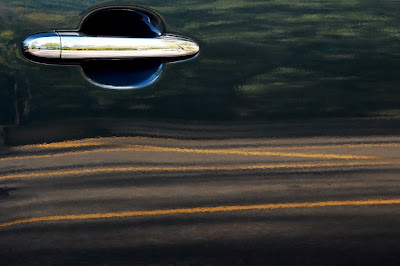 Because nothing in life is permanent, especially if it's a planned-obsolete piece of North American engineering, it's only a matter of time before the lovely set of wheels you carefully piloted home from the dealership just a few short years ago eventually becomes an older, less lovely conveyance that increasingly - and increasingly unpredictably - consumes family resources you'd rather allocate to basics like food, shelter and Apple-branded products.

So as the noise from another clearly blown wheel bearing gradually evolved from a gentle thrum to something a little less gentle, we kinda knew the wondervan's time with us was drawing to a close. As much as we enjoyed having something large enough to carry a miniature pony to the fair or the Iceland national basketball team to its next practice, our vehicle's slow de-evolution back to oxidized metal particles meant it made more sense to redirect our finite dollars toward something a little newer, a little smaller and a little (okay, a lot) more efficient. We'd miss the cassette deck, of course, but that's the price of progress.

But here's the thing: our not-so-mini minivan (seriously, can something 200+ inches long and well over two tons in weight be considered mini?) served us well. It took us to Florida five times, to Montreal dozens of times, and to countless other places near and far on trips that helped us continue to tell the story of us. Even on drives to school, it served as our little cocoon, a place where we got to spend a few relatively peaceful moments together before the day took us all our separate ways. So when it came time to take Wilhemina (or Wilma. Yes, we name our cars) on her last drive to the dealership before trading her in, I found myself trying to commit the last five years of ownership to memory.

The new car has a working rear defroster. We don't need to keep our ears tuned for the next thing to go wrong. The kids aren't allowed to eat in it. Or within a 25-foot radius, for that matter.

Our daughter named her Chloe. She fits just fine in our driveway and, more importantly, into our family. This reflective photo, shot in the parking lot of my in-laws'/mom's condo complex after completing the first leg of her first-ever road trip, makes me realize that in the end, it's not as much about the car itself as the places it takes you and the memories you make - and hold on to - along the way. If Chloe is as effective in that regard as Wilma was, we'll do just fine for the next few years on whatever road adventures await us.

I haven't ever named a car, but I do like the name Chloe - better than Wilma....LOL

Good luck with the new car and "not eating in it". Maybe you should do what I do and carry lap towels for everyone in the car, so that when we eat on the run, we don't get crumbs on our clothes.

I have never named a car... but I did have the built in cell phone transferred from the old Accord to the Odyssey. That was before the tiny individual cell phones that fit into your purse. So it is really of no use now... not digital you see.

We named our Honda Odyssey. It is called Homer.

I just hope we never get a vehicle called Iliad.

Hi, Carmi,
I finally have posted a couple of photos for your theme here after a long absence. Mine have to do with my time in Haiti.

No, but I do name my sewing machines--especially the antiques that I gather. One is Elvis and another is Jenny Lind--they are old Singers.

Oh, and my Accord has 340some thousand miles on it. Yours is an experience we don't have too often here.

Can't wait to see how long the not eating in the car lasts!!! :o)

I have never owned a car, but many of my friends have named their cars... it seems to be a common practice!

You talk about cars alot.
I had a car named The Doghouse once, a 1987 Toyota corolla. My dog liked to sleep in the backseat while the car was parked in my driveway, hence, the name.

Hey did you know an ad pops up on your blog? Scared the bejeezus out of me!

Once upon a time I named my cars, but the names were ... not repeatable in polite company. Any more I don't bother. The mod'n auto has very little romance left in it between government mandated air bags and safety recalls and a numbing kind of sameness that crosses all the make and model boundaries. For example, as butt-ugly as a '61 Dodge Dart/Plymouth Valiant was, you could not possibly mistake it for anything else. Same-same with the venerable VW Beetle (the original, not that knockoff of recent years) that was my first car.

Helena. Helena Honda. The naming was a real process. On the one hand, I preferred it to be alliterative. On the other hand, most good H names are male, and I felt my car should be female, naturally. On the other other hand, lots of female H names sound rather old lady-ish like Harriet or Heloise or...Harriet.

Just when I was about to consult my priest on the matter, "Helena" came to me in a dream. She's been through three hail storms, which I feel gives her street cred.

my 12-year-old, rusted through the passenger side floor, Maverick was known as the Evil Frog. The Honda CRX answered to The Pet. Great blog!

Just had to comment on this... I've named every car I've ever owned! Starting with "Big Red" (a maroon Dodge Caravan; yes, my parents made me drive a minivan to school), to "The Roller Skate" (a 1989 Ford Escort hatchback), to "Hot Mama" (a 1993 Nissan Altima), to "Miss Kitty" (a 1999 Mercury Cougar--rowr!!), to "Herman The Honda" (a 1998 Honda Accord), and now I have "The Penguin," a 2005 Mazda Tribute. My boyfriend drives Herman now, and before that he had a 1993 Cougar we lovingly call "The Coug." My best friend drives a Honda Civic named "Francesca," another has a Civic named "Pearl," and co-editor Whitney has a Subaru she calls "Hilary." OH and co-editor Kyle just traded in a Subaru we named "Theodore," although we always called him Ted. :) I'm totally down with the car-naming culture and I'm so glad to know my friends and I aren't the only ones out there!

Oh of course I name my cars.
Oprah was a gas guzzler.
Our last minivan was Maggie.

My new Borrego is named BadAss, because it feels SO good to get out of that minivan.

Naming cars?? OF COURSE! Every car since before I was born, right now there's a blue Odessey, Saphira(from Eragon) and Tiberon, Daddy's Toy (or DT for short) and a Rav4, Pheonix(as in out of the ashes of a crash comes a beautiful new car.)

We've named all our cars. In 23 years of marriage, we have had the following join (and all but the last two also depart) our family: