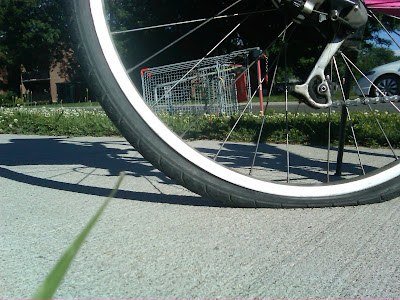 It's difficult to get where you're going when your route takes you through neighborhoods that, to be quite charitable, seem to require copious amounts of charitable giving. Notice the overturned shopping cart behind my going-nowhere machine. It's one of many littering this sad stretch of road - called, I'm not kidding, Cheapside Street - that I often try to ride at speed because, let's face it, I'm an elitist wimp who doesn't really want to get into it with the muttering drunk who claims the graffiti-covered bus stop with the shattered windows as his own.

The combination of tires that require the air to stay inside - imagine that! - and roads littered with shattered glass, nails and staples that, despite their lack of sentient capability, seem to conspire to remove said air from said tires was, unfortunately for me on this morning, not a happy one. A rogue staple quietly reduced my rear tire to mush, and by the time I felt the telltale bounciness from the rear end, I knew I was cooked. The damage was in a part of the tube that meant I wasn't going to McGyver-patch my way out of this one. Or McGruber. So out came the BlackBerry for the plaintive call home, and pretty soon my wife was winging her way east to rescue me.

While I waited, the drunk stayed on his side of the busy street. The beer store wasn't scheduled to open for another two hours.

Everything Under the sky said...

Riding bicycles takes a lot of courage in my country. The traffic rules are just not meant to be followed for the people here!! I envy people like you who can ride all day!!

Congratulations on the Blog of Note!!

...i invite you to join globalove think tank.

I was stuck with a flat tire in hot Arizona sun a couple months ago. I panicked but then my teenage son and I read the instructions, tried not to panic and changed the tire. I'm glad I did it but hope not to have to do it again.

Love your blog, and congrats on the Blog of Note award. And I totally agree with your "random acts of kindness" comment. We need more of that in this world. Good luck, and keep on bloggin.

Love is in the Smog said...

Once, I was stranded in a parking lot for two hours because "the car key wasn't working." When my boss (whose car it was) showed up to help me, we walked up to the car and he said, "that's not mine." Turns out, his was the exact same make and model but it was parked two cars over. But I probably should have known that since I had driven and parked it there ...

I'm not stupid I promise.

Your way with words always tickles me. But that looks like a dangerous place to bike through, thank goodness the liquor store wasn't open yet. Seems like the only good way to bike in that area would be in a pope-mobile! Or better yet, perhaps you could rig up that kind of plexi-glass shield around your bike. Most people seeing it would just think they'd had too much to drink, and leave you alone!

Yes, as a traveling musician I have been stranded lots of times, usually with an amplifier on a roll cart, a big suitcase and a guitar and a bunch of cables strapped to my back. I have learned to use this group of items more or less as a house, and me and my touring buddy would take turns sleeping while the other one watched for: German station police; Roma thieves; French pickpockets; and other such colorful but dangerous characters: I have slept in about 8 different famous train stations. My most favorite to sleep in was Mulhaus. My least favorite was Marseille. I have not slept there, but I have a strong sense that the new Hauptbanhof in Berlin would be an awful place to sleep.

I've been stranded at school. My car wouldn't stop and the Dept of Transportation stopped helping motorists 15 minutes ago. To top it off, I didn't have road side assistance on my car. Long story short, after wallowing in my despair, I waited and then tried to start my car again. It worked. I no longer own that car, thank goodness.

i love the pneumatically challenged
title to your poor flat tire!

congratulations on being a blog of
note!

Love your blog!Agree with your opinion!

well...it is the same reason i have for opening my blog..

Have i ever been stranded? Ha, that is the understatement of the day! It is horrible to be stranded somewhere you either dont know or dont want to be? Believe me ive had my fair share of calamities and desperate days. I hear that, keep cycling as its good for the world, leading by example. A pioneer!
Peace.

Thank you Blogger for helping me find you! :-) Stranded? Yes. On a small island. The only way to get out is by plane... or by internet. One day the island is a castle, the next day it is a prison. Congrats on getting the exposure you so rightly deserve.

Worst place I've been stranded was in a remote place called Glendambo in the Australian outback - with a blown gasket. Thank god for motor club insurance - we abandoned our car at the roadhouse, taking only what we could carry then coached it back home! Eventually our car rejoined us - but it's never been the same since! Happy travels!!

Hi from Upstate NY. Found you thru BoN and think I'll stick around as a follower. Looks like a fun ride!

...and yes, I got stranded last week with a blown transmission line on my less-than-faithful van. Trying to get home after work at 4 in the morning when the wheels stopped turning and the oil started burning. Limped to a shop and woke up my wife for a ride. Another hundred bucks down the tubes. Makes me wish I could ride my bike on my commute.

Stop by my Wayward Home sometime and visit. Bikes are spoken there...among other things.

Congrats on Blog of Note. Just like Arnold...I'll be back.

my bike is my friend, and yesterday it was an attention whore. not necessarily stranded, just bounced back and forth across town in search of a job that never existed in the first place. i go in depth here.

i suppose it's better than an irish goodbye though..

This reminds me how irrate it makes me when people call "Fat Tire " beer Flat Tire...

I stumbled upon your blog due to the blog of note award. What a pleasure.

Glad you got a ride and got out of there.