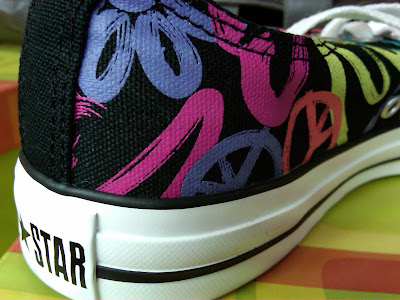 Shopping ranks relatively low on my list of preferred things to do. If I had to actually build such a list, hitting the stores would likely slot in just above shooing those pesky flying ants from the garden and just below walking the dog in a driving rainstorm.

So you can imagine how much I love looking for shoes. It's an even more depressing version of shopping, frankly. The smell of child-slave-assembled vinyl conspires with the jumble of randomly opened shoe boxes clogging the already too-narrow aisles to make you both nauseous and disoriented before you've even tried the first pair on. It doesn't help that the Britney-esque family over there seems to have mistaken the entire store for a playground for its unruly brood of hellions.

Yet on this day, I found myself in a local shoe store with three very important ladies: my wife, our daughter and my mom; three generations of Levy women, all looking for footwear. It wasn't as bad as I thought it would be. Since the employees seemed a little frazzled with the mini-Britneys, I thought I'd step in and play the shoe store equivalent of cruise director (Julie McCoy, where are you?)

First, I sat on a seat - standard guy's position, apparently - and cheerfully welcomed total strangers into the store. I thanked them for shopping with us and pretended to actually know where stuff was. It brought many smiles, so I kept up the charade for a bit. Eventually, I got bored and took out my BlackBerry for some really bad photography. When our daughter brought us this pair of Converse All-Stars - the kind of shoe Mr. Rogers might have worn, I think - I took one to the front of the store and set up shop on a dangerously tilting display of stylish but sensible pumps.

I told the rather surprised shoppers around me that the sun was better there. They politely declined my request to hold the shoe in place, but still hung around to see the final result. I set the BB to macro mode (this ridiculously limited little camera actually has macro. Amazing) and got to work. It won't replace my real camera, but if it helps me turn a disaster-waiting-to-happen into a fun romp in a godless temple of suburban commercialism, it's worth having.

And I do love our young lady's shoes. They're so her.

Your behavior would make the folks at Improv Everywhere proud.
Have you seen this one?
http://www.youtube.com/watch?v=utkkXCF8ZVc&feature=related

This is the one where 80 of their volunteers did pretty much what you did in the shoe store -- only they were all in the same Best Buy. Very funny stuff.

Randomly came across your blog! I love it. Good stuff to read! Keep going!

hi! just stopping by to say congrats on becoming a blog of note and please follow my blog if you want at...

It's always great to make people smile. You just accomplished another one, upon me reading this post. :D

my daughters love converse as well...hilarious use of your time, welcoming shoppers, etc.

I like the shoes. My husband is always cracking wry jokes to the clerks, but most go over their head or they're so hassled that they haven't really listened. Too bad, he is a scream. He also sneaks around little kids in the stores and makes faces and finger puppets at them. They all want to go home with him. He missed his calling as birthday party clown for hire.

One delightful memory was in Dayton's Dept. Store (now Macy's)just before Christmas and the shoppers were ignoring a table holding about 50 darling faced Frosty's which held a top hat over their head that moved up and down to the music. They also had Santas (not as charming) and for whatever reason I ran around the table pushing each one's button and people from all around came over to the table. We looked crazy, but happy! I swear by the time I finally walked away from that table nearly every Frosty and Santas had been selected to share the holidays with their new family.....and there was laughter and happiness along with good profit for the store!

Yeah I think I do try to make strangers smile from time to time. ;p. I do some work at a party supply store and people usually come here happy and leave happy most of the time...

Or sometimes people and their families do get stressed over all the things that they have to do. It helps to lighten up a mood and make them smile by cracking some jokes about things in general.

Karen~ love your recollections of that Christmas!

That's a pretty good photo for a what is essentially a phone cam. Wow.

I bought a small camera to carry with me because I don't want to haul the SLR everywhere, but if my phone could take photos that good I wouldn't have had to do that.

You and I feel the same way about shopping. I actually beg my husband to take the boys shoe shopping. That said, that is a cute shoe!

Whenever you say "Your turn", it makes me feel like you are talking to me directly. I love that expression!

Unless they're creepy, and if I think they need cheer-up, I always try.

Thanks for sharing your adventure into shoe land. And encouraging us to bring smiles to those out and about.

Here are a pair of Chuck's seen at a street fair last weekend.
http://www.flickr.com/photos/fingerlakes/5008362752/

While shopping for gifts for my family in Pisa one summer, I was more than astonished to see how many young Italian women were accompanied by their enthusiastic men, who happily involved themselves in the process of clothes and shoe and handbag and jewelery and lingerie shopping, all with at least one long lingering kiss or hug or squeeze or smile or laugh. To say I was envious is putting it mildly! So shop on, Carmi!

Love is in the Smog said...

"The smell of child-slave-assembled vinyl conspires with the jumble of randomly opened shoe boxes ..." HAHA that was amazing. I had to share that with my sister because I was laughing so hard when I read it.

You know what they say, all the world's a stage. ;) I love making strangers smile. Sometimes I'll randomly talking a little too loud to "share" our amusing conversation with the rest of the grocery store.
Even better is singing along to the radio in a public restroom. A better conversation starter, I have yet to find.

I love trying to make total strangers smile, although more often then not I make them scowl. In this taime and age, people in downtown Atlanta just aren't very responsive to you when you say things like "Good day" or "Hello" or "I love you."